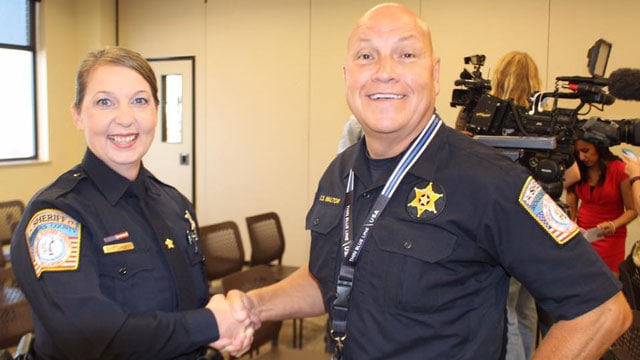 Betty Jo Shelby, the former Tulsa police officer who was acquitted in May of manslaughter in the shooting death of Terence Crutcher, an unarmed motorist who was under the influence of PCP when he stopped his SUV in the middle of the road last year, joined the Rogers County Sheriff’s Office this week as an active reserve deputy.

“Betty Shelby represents years of experience in law enforcement,” the Rogers County Sheriff’s Office wrote in a Facebook post Thursday. “She has always dedicated her life to providing assistance to other individuals, and by agreeing to volunteer her time, energy, and resources to the Rogers County community, she is simply demonstrating the continued passion that she has for her chosen profession.”

Maj. Coy Jenkins said he is “confident in her ability to move ahead in her career and provide the support, direction, and guidance that we all need to complete this extraordinary responsibility.”

Sheriff Scott Walton, who has been an outspoken and vocal supporter of Shelby, said the volunteer position could become a full-time position in the future. Although it’s an unpaid position, the duties are similar to those as a full-time deputy and Shelby – like all other applicants – was required to complete an interview, background check, and firearms qualifications.

After the Sept. 16, 2016, shooting, Shelby was placed on leave, then after the acquittal returned to work in a non-patrol position. But Shelby, who had been with the department since 2011, expressed frustration over the desk job and said she felt “isolated” from her fellow officers in a position that just wasn’t “for” her. She resigned from the Tulsa Police Department in July.

Shelby said she feels honored to have been chosen to work with the Rogers County Sheriff’s Office.

“As a reserve deputy for the Rogers County Sheriff’s Office, I will continue to serve the great state of Oklahoma and strive to improve the relationships between law enforcement agencies, organizations and our community through education and community involvement,” Shelby said in a press conference following the swearing-in ceremony. “I will work and contribute to the sheriff’s department’s mission of providing the highest quality of law enforcement services.”

According to the Associated Press, Shelby plans to speak with a group of fellow officers about what to do when charges follow an officer-involved shooting.