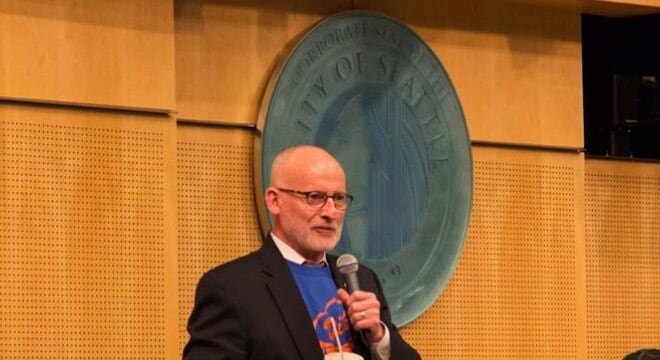 Seattle Councilman Tim Burgess, who introduced the tax legislation in 2015 and has been its biggest champion, said he was vindicated and hoped other cities will follow Seattle’s lead. (Councilman Burgess)

In an 8-1 ruling handed down Thursday, the state’s high court swatted away a challenge from gun rights groups and retailers to Seattle’s controversial “gun violence tax.”

The panel held that large cities such as Seattle under state law can establish and collect local taxes and that, contrary to the lawsuit claims, the $25 fee on guns and up to 5-cents per round of ammunition, does not violate Washington’s preemption law.

“While courts should be dubious of regulations masquerading as taxes (and vice versa), in this case [plaintiffs] offer no convincing evidence that the Ordinance has a regulatory purpose or intent,” said Justice Debra Stephens for the majority. “It is a tax.”

The suit, brought by the National Rifle Association, National Shooting Sports Foundation and Second Amendment Foundation in 2015, argued the ordinance was a poll tax on the right to bear arms and an effort to drive Seattle’s firearms retailers out of business. As such, they held it violated Washington’s 1983 preemption law barring cities from establishing regulations stronger than the state’s when it came to public firearm policy.

In a dissent penned by Justice Sheryl Gordon McCloud, the jurist held that the state’s preemption law was clear, saying, “A city tax that singles out the sale of firearms and ammunition for disadvantageous treatment is therefore preempted.”

Seattle Councilman Tim Burgess, who introduced the tax legislation in 2015 and has been its biggest champion, said he was vindicated and hoped other cities will follow Seattle’s lead.

“We knew from the start that we had a strong and sound legal case, and I’m proud that the tax proceeds can continue funding gun safety research and prevention programs at Harborview Medical Center, which is underway right now,” Burgess said in a statement.

Mike Coombs, co-owner of the Outdoor Emporium, one of the firearms retailers involved in the suit as a plaintiff, says the ruling may push him out of the city to get away from the taxes he says are targeting his business, the largest gun seller in town.

“We’ve had to lay off some employees, and that’s been tough, and I don’t see at this point it’s going to get any better,” Coombs told Komo News.

Gun rights groups have painted the tax, now in its second year, a failure as the number of shootings in the city are on the rise while revenues collected have fallen short of the city’s goals.