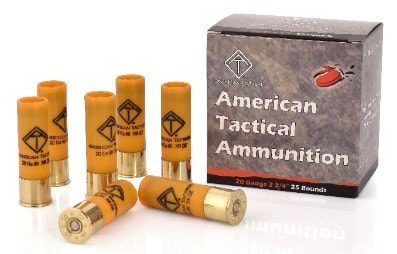 The ammunition can be paired with the company’s line of shotguns for optimal performance. (Photo: American Tactical)

The US manufacturer and importer of firearms, ammunition and tactical equipment announced that the new shotgun ammunition aims to give shooters quality rounds at an affordable price. In addition, each shotgun offered through American Tactical pairs with its ammunition counterpart resulting in the “perfect shooting package for hunters and hobby shooters alike,” according to a company press release.

For home defense, American Tactical serves up the AMTAC line of shotguns available in both pump-action and semi-automatic variations. These guns pair well with the company’s 12-gauge shotgun ammo to offer a complete home defense package. The ammo comes 25 rounds to a box and is priced at $6.99.

Competition shooters firing the engraved Calvary line with wood stock have the choice of three calibers of ammo to include the 12-gauge or 20-gauge for $6.99 per 25 round box or .410-gauge ammunition priced at $11.99 for 25 rounds.

Rounding out the offerings is 12-gauge ammunition designed to coincide with American Tactical’s Road Agent 12-gauge shotgun. Built for hunting enthusiasts, the ammunition is priced at $6.99.