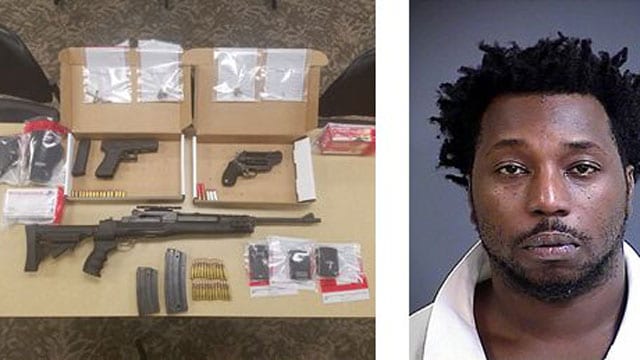 A man is facing multiple charges after authorities found drugs and guns in his North Charleston, South Carolina, apartment Thursday.

Authorities say they went to Jenkins’ apartment following complaints about illegal drug sales. Officers knocked on the door and Jenkins answered, but as soon as he saw it was the police, he quickly tried to slam the door shut.

Officers said they could detect a strong scent of marijuana coming from the apartment, while a second suspect could be seen inside the apartment. The second suspect jumped up from a couch and attempted to run to a back bedroom, but dropped a handgun in the process.

A search of the apartment turned up a loaded .40-caliber Glock 22, which was previously reported stolen, as well as a .45 LC/410 Taurus Judge and a .223-caliber Ruger Mini 14. Police also seized magazines, holsters, and a box of ammunition, in addition to 3.3 grams of packaged marijuana, four joints, .6 grams of packaged cocaine, digital scales, and sandwich bags.