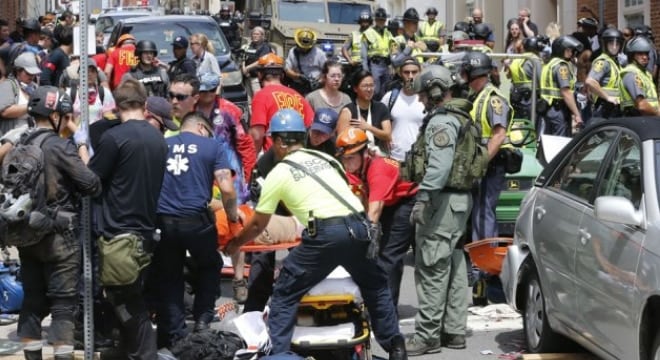 The weekend clash left one dead and over 40 injured, mostly from a vehicular ramming (Photo: AP)

Gun control advocates laid the blame for the violence in Charlottesville over the weekend on the nation’s largest gun rights group, citing the National Rifle Association’s provocative rhetoric against liberal demonstrators and support for open carry.

The violence, including a vehicular assault that killed 32-year-old Heather Heyer and injured 19 others, came as part of a standoff between protesters and counter-protesters gathered at Charlottesville’s Emancipation Park in anticipation of a rally by far-right groups over the removal of Confederate monuments from the park. Though the suspect in the ramming was taken into custody and charged with murder among a host of other crimes, gun control groups placed the blame on the NRA and the White House.

“The violence we saw today in Charlottesville is the result of the dangerous rhetoric and hate speech that the NRA and Trump have promoted,” said Lori Haas, a spokeswoman for the Coalition to Stop Gun Violence, in a statement. “The symbiotic relationship between the NRA, Trump, and America’s far right hate groups cannot be ignored.”

While there was no gun violence reported, the group noted that the white nationalists protesting were legally carrying rifles. “This alone indicates their willingness to use intimidation and deadly force to advance their hateful agenda,” Haas said.

The condemnation was echoed by Moms Demand Action with founder Shannon Watts posting on Twitter, “You built this, America, by allowing @NRA lobbyists to write our nation’s gun laws. Open carry is legal in 45 states with little regulation.”

Virginia Gov. McAuliffe has declared a state of emergency to aid state response to the violence in Charlottesville, which included the deployment of state troopers, as well as the Virginia National Guard.

“I am disgusted by the hatred, bigotry and violence these protesters have brought to our state over the past 24 hours,” McAuliffe said. “The actions I have taken are intended to assist local government and restore public safety.”

In a statement after news of the incident broke, Trump stressed the importance of “swift restoration of law and order,” but it was his blame of “many sides” that was widely panned on both sides of the political aisle as he failed to condemn, specifically, the white nationalists at the center of the incident.