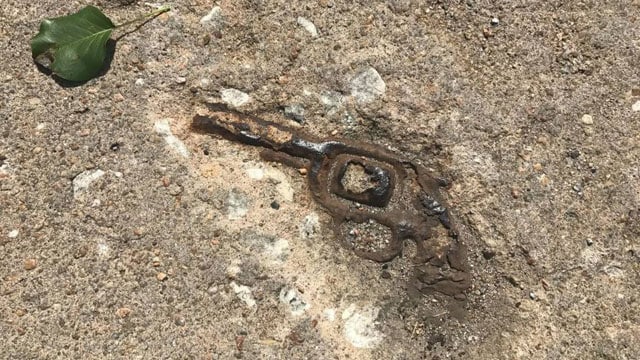 According to reports from The Wichita Eagle, local gun enthusiasts say – based on the amount of deterioration – the gun is likely from the early 1900s, more specifically the 1940s. Guesses on the type of gun, however, range from a single action revolver to a kid’s cap gun.

But it’s still a mystery how – or when – the gun got there.

Reggie Perez from Wichita’s Public Works & Utilities Street Maintenance said the last improvements made to the road were done in 2005. But to further complicate the mystery, the gun was found in a single block of concrete surrounded by bricks. According to Perez, when the bricks in the road turn up missing or damaged, road maintenance crews simply fill in those places with concrete.