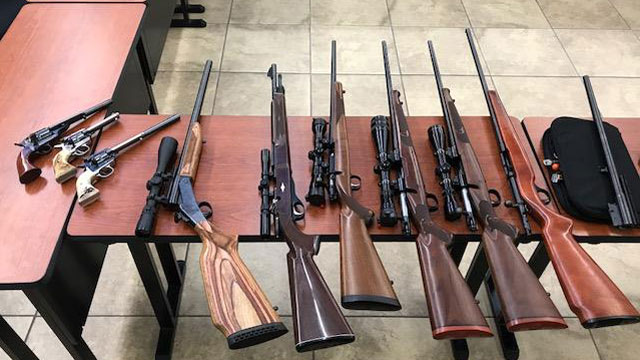 The license plate reader alerted authorities to a stolen vehicle, but inside that vehicle they also found stolen guns. (Photo: Pittsburg Police Department)

Authorities recovered more than half a dozen stolen firearms from a vehicle in Pittsburg, California, early Friday morning following an alert from a license plate reader.

According to the Pittsburg Police Department, the incident unfolded around 3:30 a.m. and came to an end after a vehicle pursuit and foot chase.

Authorities say the vehicle driven by the suspect, whose name was not released, had been stolen, prompting the license plate reader alert. Officers then monitored the freeway until they located the vehicle and attempted to initiate a traffic stop.

Instead of stopping, however, the suspect tried to elude authorities by driving away but eventually stopped the vehicle on the freeway’s on-ramp. The suspect then got out of the vehicle and fled on foot before he was apprehended with the help of a K-9 unit.

A subsequent search of the stolen vehicle turned up six long guns and three revolvers, along with hundred of rounds of ammunition and other valuables, all of which were previously reported stolen during a burglary in a nearby city.

According to the East Bay Times, the cameras were installed on the freeway in Pittsburg and other areas of Contra Costa County following a rash of shootings, some of which may have been the result of turf wars between rival gangs. The county saw some 87 freeway shootings in 18 months, which left eight people dead and 39 injured.

Contra Costa County Senior Deputy District Attorney Mary Knox noted that part of the problem in solving the crimes was the fact that the California Highway Patrol would respond to reports of vehicle accidents but it wasn’t until after they arrived on the scene that authorities would realize the crashes were actually caused by gunfire.

Knox said, prior to the installation of the crime-fighting technology, they were losing a great deal of investigative lead time. However, reports indicate that freeway shootings in the county have declined.

“(Freeway shootings) have been down, and I think, in part, because the criminals have become aware that we’re very focused on that,” said Contra Costa District Attorney Mark Peterson.