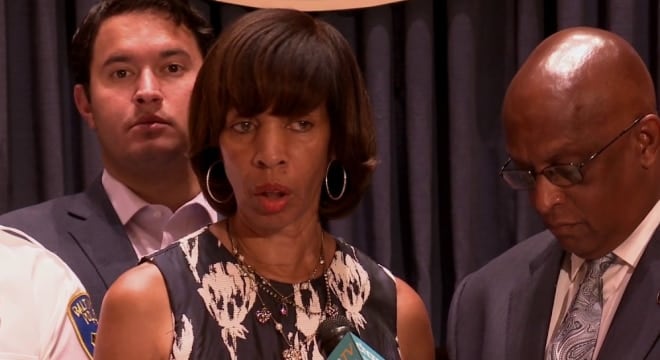 Baltimore Mayor Catherine Pugh and some city leaders are backing a measure to establish a mandatory minimum sentence for those found with handguns near Baltimore schools, parks and other public buildings. (Photo: mayor.baltimorecity.gov)

The City Council gave narrow preliminary approval to a proposed ordinance designed to bring strict sentencing for some found with guns.

The proposal passed the 15-member council by one vote while dozens gathered outside City Hall to protest the controversial measure, which is billed as a partial cure for Baltimore’s climbing murder rate.

Councilman John Bullock cast the deciding vote saying that illegal guns were “inherently tools of violence that result in the loss of life,” the Baltimore Sun reported.

However, as modified last month in committee, first-time offenders would not be eligible for the mandatory sentence except in cases where the illegal handgun they possessed was used in a crime. Also, the state’s attorney’s office could use discretion in charging individuals with violations of the city ordinance should it become law, skirting the issue entirely.

“Although the legislation is stripped down, it is still bad policy for Baltimore,” said Adam Jackson, with the community group Leaders of a Beautiful Struggle. “The fact that this bill is essentially the status quo further proves that this will not solve Baltimore’s crime problem.”

The proposal’s success comes days after the announcement of the City Council’s Public Safety Committee’s Gun Violence Plan that aims to expand and support citizen-led crime reduction initiatives such as late-night basketball, mental health services to youth and mentoring programs.

The plan also calls on the city to fill open spots in the Baltimore Police Department, re-institute the auxiliary police program and expand the newly reformed cadet program. Targets include at least 10 auxiliary officers for each district to write reports and respond to minor incidents, and 100 cadets aged 18-20.

The proposed ordinance needs a final approval from the Council, which is expected in coming weeks.