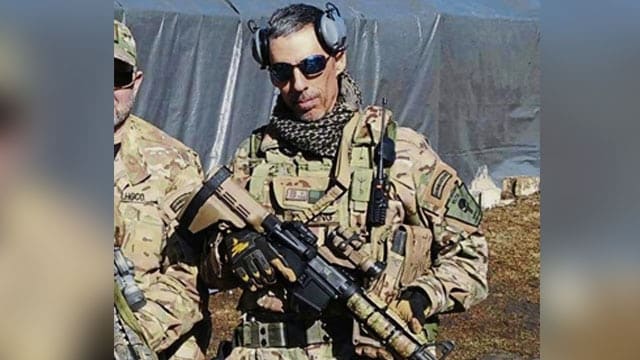 Pennsylvania Light Foot Militia leader Christian Yingling says he wanted to protect the First Amendment rights of protestors, but called the organizer of Saturday’s rally a “piece of shit.”

The leader of a Pennsylvania-based militia group that attended Saturday’s ‘Unite the Right’ event in Charlottesville is condemning the white nationalists who put on the rally.

Christian Yingling and 32 other members of the Pennsylvania Light Foot Militia were armed and on hand Saturday to serve as “neutral peacekeepers,” according to reports.

The militia sought to prevent clashes between white supremacists and counter protestors, but Yingling said they were outnumbered. The group withdrew shortly before a driver rammed a car into a group of counter protestors, killing one woman and injuring more than a dozen others.

“It was a resounding success until we were just so drastically outnumbered that we couldn’t stop the craziness,” Yingling told the Daily Progress of the clashes at the event. “It was nothing short of horrifying.”

The Pennsylvania Light Foot Militia arrived on Saturday around 7:30 in the morning. Five hours later, they were asked to leave. Virginia’s secretary of public safety, Brian Moran, said authorities were worried Yingling and his men would be mistaken for National Guard members by the public.

“They seemed like they weren’t there to cause trouble, but it was a concern to have rifles of that kind in that environment,” Moran said.

Yingling was carrying a Sig Sauer AR-556 rifle. While the magazine was loaded, he said anybody with a long gun was ordered not to have a round in the chamber. “Now, our sidearms are generally chambered and ready to go,” he said.

Yingling said the idea that his group sympathized with white nationalists was absurd. In a Facebook Live video on Sunday, he called the organizer of Saturday’s event a jackass.

“I wanna publicly state, Jason Kessler, you’re a piece of shit for what you did to that city yesterday,” Yingling said in the nearly 45 minute video.

“This rally had nothing to do with uniting the right wing,” Yingling said. “They weren’t there to support Southern heritage or protest a statue; they were there to fight.”

Still, Yingling’s criticism wasn’t reserved for rally organizers. He also took shots at the anti-fascists, and even the police, saying they were poorly prepared and not assertive enough. Moran disputed that claim.

“To say we were unprepared or inexperienced is absolutely wrong,” Moran said. “We unequivocally acted at the right time and with the appropriate response.”

Yingling said the fact that not a single shot was fired by his men was a testament “to the discipline of the 32 brave souls serving under me during this particular operation.”

“Not one of my people said a word,” he said. “They were given specific orders to remain quiet the entire time we were there. … Our mission was to help people exercise their First Amendment rights without being physically assaulted.”

Yingling said his group wasn’t there to take sides. He said that fact has been misconstrued in the media at previous events. “While I could completely understand Southern people’s need to show up and defend their heritage, I could also understand Black Lives Matter to defend theirs,” he said, talking about what he’d discussed with members of the media.

The Pennsylvania Light Foot Militia is one of 276 militias and 998 “active extreme anti-government groups,” according to a 2015 report from the Southern Poverty Law Center. The SPLC notes, however, that inclusion in that list “does not imply that the groups themselves advocate or engage in violence or other criminal activities, or are racist.”