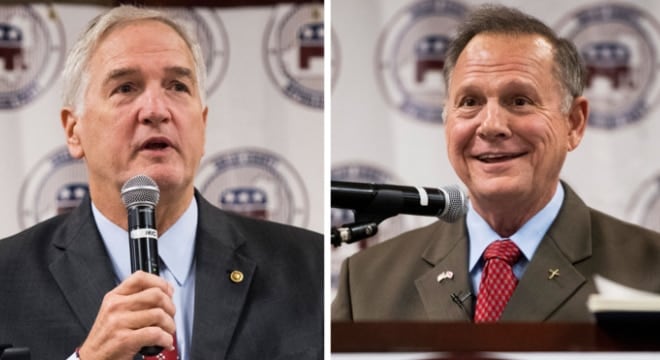 Among the leading candidates to fill Jeff Session’s seat in the Senate are “10 Commandments Judge” Roy Moore and “Big Luther” Strange.

The open spot in Alabama’s Senate delegation came after Sessions was confirmed as President Trump’s Attorney General in March and is due to be filled by a special election in December, though party primaries for the 19 current candidates are set to take place Tuesday.

Leading the pack of Republicans in the polls is former Alabama Supreme Court Chief Justice Roy Moore, 70, who is probably best known for refusing to remove a monument of the Ten Commandments from his courthouse in 2003 despite orders to do so by a federal court. Moore resigned from the court in April to pursue Session’s seat and has picked up a slew of endorsements ranging from pastors to Chuck Norris and Duck Commander founder Phil Robertson.

Strange, the former state attorney general appointed to fill the seat by Gov. Robert Bentley until the election, earned the early support of the National Rifle Association primarily due to his strong record of enforcing Alabama’s preemption laws when it came to gun free zones established by local communities. While in the Senate this year, he has backed the Hearing Protection Act as well as other pro-gun measures and asked the NRA to help teach Congress how to shoot in the aftermath of an attack on Republican lawmakers at a charity softball event.

The NRA has spent about $43,000 on radio ads for Strange. Besides the continued support of the NRA, Strange picked up the president’s endorsement last week.

Though he has raised the most money in the race — more than $3.2 million for his campaign, six times the amount of his closest competitor — Strange is fighting for second place in the polls with U.S. Rep. Mo Brooks.

Brooks, a Republican who currently represents the state in Congress, has raised about $540,000 and has used the audio of the baseball field shooting that wounded Rep. Steve Scalise and four others in campaign ads. He has gone after Strange, characterizing him as “a lap dog for Swamp King Mitch McConnell.”

While Alabama has not elected a Democrat to the Senate this century, former U.S. Attorney Doug Jones, known in the state for prosecuting cold cases from Civil Rights era church bombings in Birmingham, has earned the endorsement of Vice President Joe Biden, but in a state that Trump won by 30-percentage points last year, is seen as a longshot candidate. Republicans, with Session’s seat counted, have a 52-seat majority in the chamber.

If no candidate wins a clear 50 percent of the vote in the primary this week, a runoff is set for Sept. 26 with the special election itself for Dec. 12.