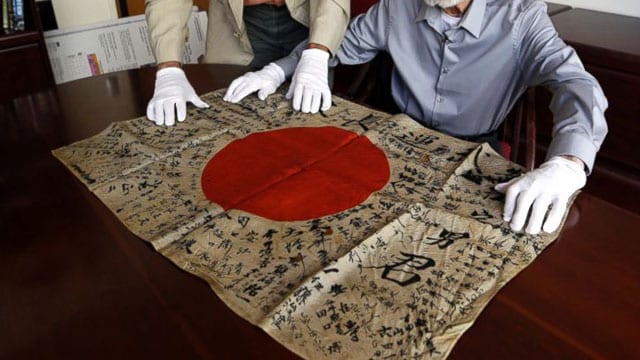 A 93-year-old American World War II veteran recently took a 10,000-mile trek to return a Japanese flag to the family of an enemy who died during the war more than 70 years ago.

Marvin Strombo arrived in Tokyo on Friday, then traveled to a remote tea-growing village to meet the Japanese soldier’s brother and two sisters.

Strombo recalled the fleeting moments in 1944 on the island of Saipan when he came across the deceased Japanese soldier, whom he described as laying peacefully, as if he were asleep. Peeking out of fallen soldier’s pocket was a silk cloth, which Stombo pulled out to reveal a Japanese flag, the red sun surrounded by intricate Japanese markings.

Strombo caught up with his crew and years after the war’s end, the flag made its home in the glass behind Strombo’s gun cabinet. The veteran said he previously tried to learn more about the fallen soldier or his family, but before the days of the Internet, the task turned out to be difficult.

More recently, with the help of the Obon Society, a nonprofit based in Oregon that helps to heal the wounds of war by returning soldiers’ personal effects to their families, Strombo was united with the Japanese soldier’s family.

The soldier was identified as Yasue Sadao and the intricate writing on the flag turned out to be the names of hundreds of family members and friends, including the names of Sadao’s brother and two sisters, who Strombo met with last week.

The journey has no-doubt been an emotional one for both Strombo and Sadao’s family, but Strombo somberly said before boarding his plane bound for Japan, “I think that soldier wanted me to find him for some reason.”