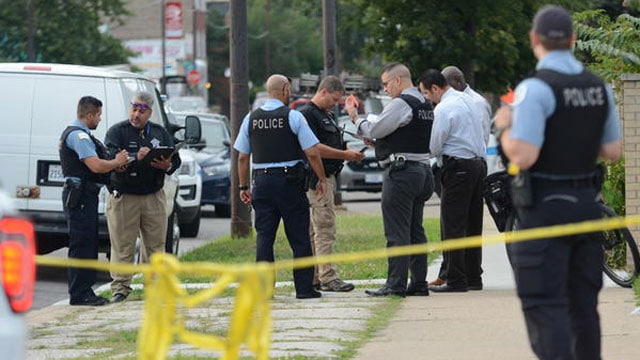 Authorities investigate after three people were fatally shot in what a resident says was a home invasion. (Photo: Brian Jackson / Chicago Tribune)

According to the Chicago Tribune, the incident unfolded around 5:30 p.m. about two blocks from the Chicago Skyway.

The man, who is in his 30s and lives at the home with his parents, told police he fired at the trio after they broke into the basement of the house. He then locked himself in another room as he called the police.

All three suspects were pronounced dead at the scene and were later identified as 17-year-old Antonio Lopez, 22-year-old Narcisco Ledesma and a 24-year-old woman whose identity was not yet released. The Cook County medical examiner’s office determined Ledesma was shot in the head, while Lopez died from multiple gunshot wounds.

At this time, no charges have been filed against the resident, who authorities confirmed possesses a valid FOID card. However, the incident remains under investigation and, according to the Chicago Sun-Times, police spokesman Anthony Guglielmi said they have “noticed inconsistencies in his story.”

Guglielmi noted only one weapon was recovered from the scene and said they are “pressing pretty hard” to get answers from the resident, who has reportedly hired an attorney.

The resident’s friend, Ivan Real, told reporters that have been a recent increase in home invasions in the area, but he was “flabbergasted” to see it happen to a close friend.

“Me and her walk over here and I see them in the back and the front, and they say someone died and I’m just praying it was not him,” Real recalled.