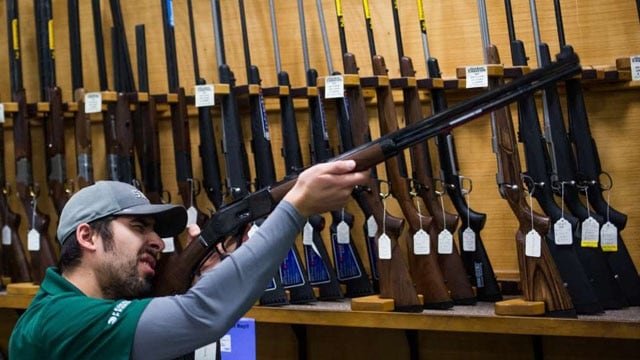 Steven Aragon holds a gun at Outdoor Emporium in Oct. 2015. The shop’s owner says the city’s gun tax is hurting business, and city leaders haven’t been transparent about the funds that have been collected. (Photo: Grant Hindsley/Seattle Post-Intelligencer)

A controversial gun tax in Seattle is coming up way short of a projected revenue forecast.

For every firearm sold in the Emerald City, a $25 tax is collected. A nickel per round is also collected for .22-caliber ammunition or greater. The money was set aside to help pay for a gun violence study.

“The fundamental principle behind the tax is that the firearms industry should contribute to mitigating the harms caused by their products,” said City Councilman Tim Burgess. “That remains the primary motivation for the tax. That’s what we set out to do, that’s what we passed and that’s what the state Supreme Court has validated.”

The tax survived a constitutional challenge from the National Rifle Association, the National Shooting Sports Foundation and others. They argued the city shouldn’t have been able to levy the tax because the state doesn’t let local governments regulate firearms.

More than 80 percent of the revenue collected last year came from sales at the Outdoor Emporium. Owner Mike Coombs said sales have plummeted 15 percent since the tax took effect in January 2016. He said he doesn’t believe the city’s really trying to collect money for a study.

Coombs said another store he owns outside Seattle hasn’t seen the same decline in sales. He questioned what the city would do if he decided to move his Seattle store to another town.

“What is their plan to make sure that they always get that money?” he asked. “They didn’t think it through.”