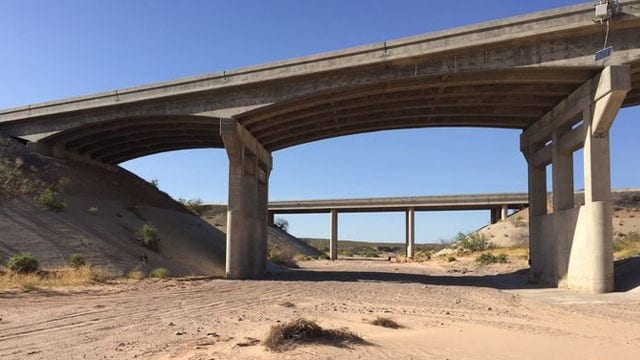 The site of the 2014 Battle of Bunkerville, in the Toquop Wash underneath Interstate 15 – about 80 miles north of Las Vegas. (Photo: Robert Anglen/The Republic)

In a dramatic conclusion to a weeks-long legal fight, defendants waived closing arguments Tuesday and a jury began deliberating in the retrial of four men facing several felony charges for their role in the 2014 Battle of Bunkerville.

Lawyers for Scott Drexler, Eric Parker and Steven Stewart, all of Idaho, and Oklahoma native Richard Lovelien chose not to deliver a final address to the jury before deliberations, according to the Arizona Republic.

“The message is simple,” said lawyer Shawn Perez Tuesday afternoon. “You silenced us the entire trial … there’s nothing more to say.”

The four men face 10 felony charges including conspiracy, weapon possession and assault on a federal officer stemming from a tense, six-day standoff between dozens of armed ranchers and U.S. Bureau of Land Management officials. People came from all over the country to support Nevada rancher Cliven Bundy, who’d spent decades refusing to pay grazing fees to the federal government. BLM agents came to collect cattle in lieu of the payments. The incident ended when the agents retreated. No shots were fired and no one was injured.

The refusal to deliver closing remarks was a strategic move aimed at depriving prosecutors the opportunity to rebut arguments. “I think it was effective,” said Perez. “We all decided last night we were going to waive arguments. Otherwise the government was going to come back on rebuttal and embellish stuff and our hands would be tied.”

Perez, Lovelien’s lawyer, and the rest of the defense attorneys have complained that U.S. District Court Judge Gloria Navarro has improperly denied the four men a fair trial. The defense couldn’t tell jurors why defendants joined the Bundy Ranch protest, they couldn’t mention the legality of openly carrying firearms in Nevada, and they couldn’t say anything about how joining a militia was legal. They were also prevented from arguments mentioning First or Second Amendment rights. Perez said it was nearly impossible for the defendants to offer meaningful arguments in the trial.

On Monday, Parker testified, but Navarro quickly removed him from the stand. He was trying to talk about what he saw during the standoff, but prosecutors kept objecting to his testimony. When the judge ended his remarks, Parker went back to the defense table and started crying as Navarro dismissed the jury. Defense lawyers called for a mistrial, but Navarro wasn’t having it. She instructed the jury to act as if Parker’s testimony never happened.

Drexler testified, saying he brought weapons to the standoff, but didn’t mean anybody any harm. “My intent was to disappear and not be a threat to any person in the wash,” he said.

He admitted to bringing an AR-15, a handgun, and more than 200 rounds of ammo. The four men are considered the least culpable of those charged in connection with the standoff. Still, if convicted, they could spend the rest of their lives behind bars.

Last month, 53-year-old Gregory Burleson was sentenced to more than 68 years in prison for his role in the standoff. He was found guilty in April of eight counts, including threats against federal agents and assault.

A total of 19 people have been arrested and charged in connection with the standoff. Bundy and two of his sons are slated to be tried later this year with two other defendants. Six others will be tried next year.