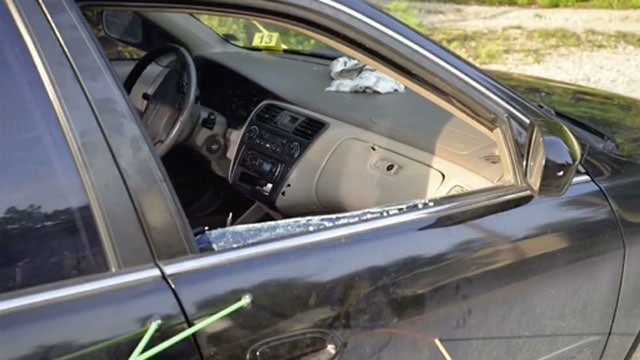 The homeowner left the getaway car with shattered windows and at least one blown tire. (Photo: Washington County Sheriff’s Office)

Three Florida teens are behind bars after they broke into a vehicle in Panama City Beach early Sunday morning and were met by the homeowner, who was armed with an AK-47.

“We’re thankful the homeowners in this incident are safe and that we got these suspects behind bars as quick as we could,” Washington County Sheriff Kevin Crews said in a statement.

Crews called it a “job well done” and noted that burglaries and “the danger that comes with it” will not be tolerated.

The incident unfolded around 2:45 a.m. when the homeowner’s wife was awakened by noises outside of their home. The woman then woke her husband, who looked outside and observed three suspects breaking into the family’s vehicles.

The man, who knew a 9mm handgun was in one of the vehicles, told his wife to watch over their children and ensure their safety as he grabbed an AK-47 and confronted the suspects.

Once confronted, the suspects fled to a nearby getaway vehicle, but the homeowner said one of the suspects, who was later identified as 19-year-old Tristen Wilson, turned toward him in a manner that led the homeowner to believe Wilson had a weapon. The homeowner, in turn, fired his weapon.

Wilson was struck in the leg and the gunshots left the getaway car’s windows shattered and at least one tire flat.

Deputies responding to a 911 call came upon the getaway vehicle, which was occupied by all three suspects. As Wilson exited the car, he reportedly dropped a small bag of marijuana.

Deputies noted that the trio did not follow commands and appeared to be under the influence of drugs or alcohol. As they were detained, Wilson revealed that he had been shot, and a subsequent search of their vehicle revealed two handguns, including the 9mm stolen from the property where shots were fired just minutes prior.

Wilson was transported to the hospital for medical treatment and is expected to recover.

The two other suspects were identified as 15-year-old Kevin Taylor and 19-year-old Conrad VonBlankenburg. All three were charged with grand theft of a firearm, two counts of burglary of a dwelling, structure or conveyance, and obstructing justice/tampering in felony first-degree proceeding, while Wilson was slapped with an additional charge for marijuana possession.

The homeowner and his family were uninjured.