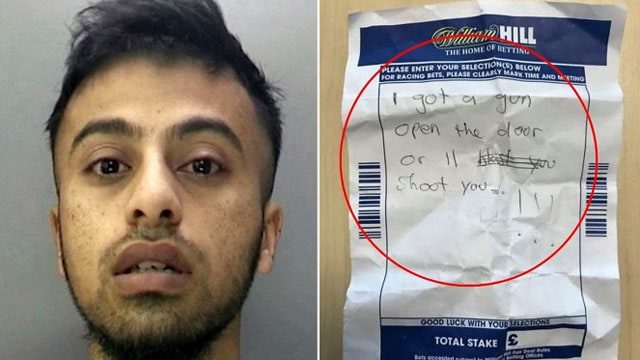 Authorities in England were easily able to track down the suspect who robbed a gambling den earlier this year because he previously applied for a job with the business and left all of his personal information on his resume.

Dopey Umar Mirza, 26, was sentenced Monday to six years behind bars for the March 27 robbery.

Mirza came to the Birmingham business wearing a hood and a mask while carrying a handgun. Mirza took a gambling slip and wrote the words, “I have got a gun, open the door or I will shoot you.” He apparently first wrote “blast you” but scribbled that out and replaced it with “shoot you” to make his meaning a bit clearer.

Mirza walked away with some $22,000, but ditched his mask while making his escape. His face was then revealed on security cameras, making it painfully easy to identify – and locate – him.

A search of Mirza’s home revealed the betting slip with the written threat, the mask, as well as the gun, which turned out to be fake.

According to Mirza’s lawyer, his client has been battling a gambling addiction for the last few years.