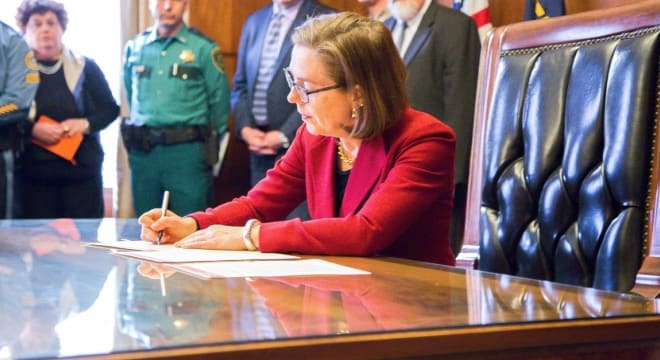 Brown, a Democrat, signed the measure into law this week after it squeaked through the legislature. (Photo: Gov. Brown’s office)

The law, SB 719A, allows police, or a member of a subject’s family or household, to file a petition with the court which could lead to an order prohibiting firearms possession if it is believed they pose an imminent risk to themselves or others. The bill passed the Senate 17-11 in May and the House 31-28 last month, picking up only one Republican supporter along the way.

Brown, a Democrat, signed the bill without comment this week but in remarks to lawmakers during the legislative process she called Extreme Risk Protection Orders the “best way to ensure that a person who is at risk of harming themselves or others is identified, while still ensuring their rights are protected by a court review.”

The new law will establish a process for obtaining an order issued by a judge in a civil court prohibiting the subject from possessing or buying firearms or ammo for one year. It grants police enforcing such orders the power to search for and seize guns that were not surrendered or stored with a third party such as a gun dealer. The subject of the order has 30 days to request a hearing to keep their firearms, which must be held within 21 days.

Those filing fake orders could be imprisoned for up to a year, or pay a fine of up to $6,250, or both.

The law was modeled on one adopted after a ballot referendum last fall in neighboring Washington following a $3.5 million push by gun control groups, which in turn was based on a 2014 California law.

Gun control advocates lauded the new tool to take guns out of some situations.

“SB 719 is a common-sense bill that will empower families and law enforcement officers to take action to potentially prevent tragedies before they happen,” said Lisa Reynolds with Moms Demand Action in a statement. “That law will help save lives.”

Second Amendment groups have blasted the ERPO process, arguing it provides no structure for those deemed at risk to receive help, or those dangerous to be taken into custody. Further, they point to due process concerns.

“By allowing a law enforcement officer, family member, or household member to seek the ERPO, SB 719A would allow people who are not mental health professionals, who may be mistaken, and who may only have minimal contact with the respondent to file a petition with the court and testify on the respondent’s state of mind,” says a statement from the National Rifle Association’s legislative lobby arm.