The Pocket Hammer is a badass slingshot (VIDEO)

The Pocket Hammer is a badass little slingshot that features a rubber pocket instead of the traditional straps. You just drop your ammo in, pull the pocket back and let go. Pow!

You can shoot pretty much anything out of the Pocket Hammer. However, included in the box that was sent to us for this review, was a bag of 100 5/16″ steel ball bearings. They are approximately .30 caliber and weigh around 70 grains. They work perfectly in the Pocket Hammer.

It’s also possible to shoot arrows from the Pocket Hammer with a special pocket and quiver. You need to order the special arrows from Pocket Hammer. For this review, however, I’m focusing only on firing the steel balls.

I filled a bunch of aluminum cans with water and set them up to see what kind of damage I could inflict upon them with the Pocket Hammer. I shot from ten yards away.

Now I haven’t shot a slingshot in years, so I was a little rusty. But still, within a half dozen shots, I was starting to pick them off like a pro. The ball comes out of the Pocket Hammer at around 350 feet per second. That’s enough for the balls to easily pass through the cans and keep going.

Just to show the difference, I shot an exact same can filled with water with a .22 long rifle bullet. The 40-grain bullet leaving a Ruger 10/22 rifle traveling at roughly 1200 feet per second caused the can to explode. So, there’s definitely a big difference in power between a .22 long rifle bullet and a 70-grain steel ball bearing coming out of the Pocket Hammer.

I then proceeded to test the Pocket Hammer on some plastic quart juice containers, again from ten yards. Interestingly, the first hit failed to penetrate the container. I had to pull the pocket to its fullest and then penetration was good, through both sides. So, you really have to lay into the pocket to get the power you want.

Now I’m not sure if the Pocket Hammer could kill a squirrel, not that you want to murder a squirrel, because that’s illegal in many places. But if you absolutely had to, say, you lived on a farm and had a squirrel infestation, I don’t think the Pocket Hammer would be strong enough. It would certainly give the squirrel a very bad day – if you hit it.

And that’s my next test: accuracy.

Now, by the time I got to this point in the review, I’d put about 50 balls through the Pocket Hammer and I was getting a feel for it. 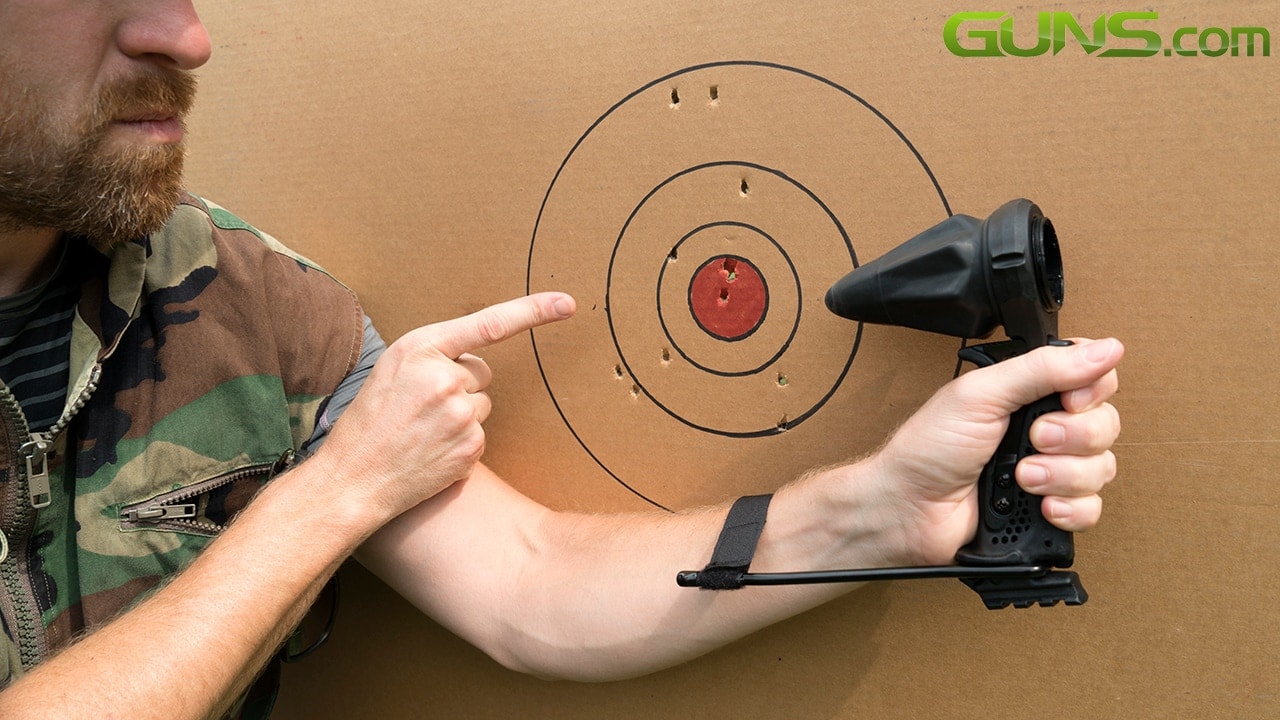 I set up a cardboard target with a 14-inch outer circle and smaller circles going down to a 2-and-a-half-inch red bull’s-eye. I backed off ten yards and let loose. I fired eleven shots and managed to get two in the bull’s-eye and the other nine in the 14-inch circle.

There’s obviously a learning curve with this product. With practice, I believe I could get all shots into the bull’s-eye. If I were to back off to twenty or thirty yards away, I think accuracy would suffer greatly. But again, with a ton of practice, anything’s possible.

In terms of quality of the product, I had no issues. After 100 balls, I saw no signs of breakage or damage. I think this product would stand up to a few thousand shots. My Pocket Hammer came with an extra pocket and they’re not expensive to buy. The possibility of shooting arrows is really neat. I’ll probably pick some of those up in the future and give it a try.

Overall, I give this product two thumbs up. For $100, you get the full Pocket Hammer kit that comes with lots of extra. It’s well built, well designed and it’s a lot of fun to shoot.