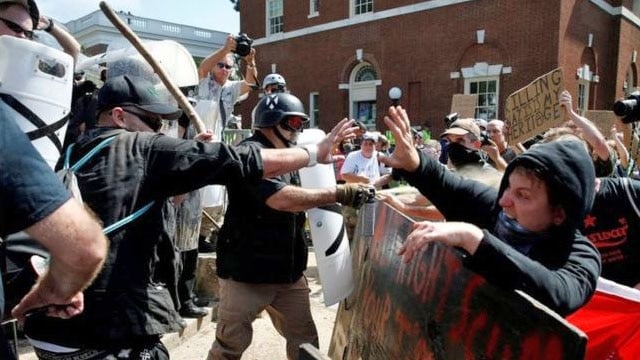 McAuliffe made the comments in an interview with Black Lives Matter activist DeRay McKesson.

“They had battering rams and we had picked up different weapons that they had stashed around the city,” the governor said.

That quote got picked up by the Guardian and other media, but a state police spokesman refuted the claim Wednesday in an interview with the libertarian publication Reason.

“The governor was referring to the briefing provided him in advance of Saturday’s rally and the extra security measures being taken by local and state police,” said Corinne Geller, a spokesperson with the Virginia State Police. “As a safety precaution in advance of August 12, such searches were conducted in and around Emancipation and McIntire Parks. No weapons were located as a result of those searches.”

McAuliffe also claimed militia members in the crowd had “better equipment than our State Police had.”

“You saw the militia walking down the street, you would have thought they were an army,” Reason cited the governor as saying in a now edited New York Times story.

But Geller said the police were prepared for the rally.

“The governor was referencing the weapons and tactical gear the members of various groups attending the rally had on their persons,” Geller said. “I can assure you that the Virginia State Police personnel were equipped with more-than-adequate specialized tactical and protective gear for the purpose of fulfilling their duties to serve and protect those in attendance of the August 12 event in Charlottesville.”