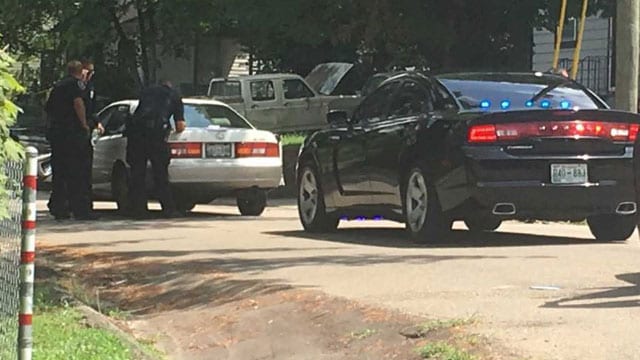 Police conduct an investigation after two people were shot while trying to rob someone Wednesday afternoon. (Photo: WATE)

Although not many details have been released at this time, Knoxville Police indicated the shooting was not a random act, but rather the two men were shot during the commission of a crime.

According to LexisNexis, a website that provides details about local crimes and other information, the incident was the robbery of an individual at a residence.

Authorities received a 911 call just after 1 p.m. The caller stated they were on their way to the hospital with a man who had been shot multiple times. At the time the call was made, the vehicle they were in was less than two miles from where the attempted robbery occurred.

Once at the hospital, medical personnel stabilized the gunshot victim, then transferred him to another hospital for more intensive care. Reports indicate the man’s injuries were considered to be potentially life-threatening, although there has been no update on his condition since Wednesday.

A little more 10 minutes after police received the first 911 call, authorities were again alerted to a gunshot victim who arrived at a different hospital. That individual had also been shot multiple times in the leg, but his injuries did not appear to be life-threatening.

There may have been a third individual involved in the robbery, but despite an extensive search of the area after the shooting, that person has not been identified or located at this point.

The incident remains under investigation and, according to reports from local media, police are talking with several witnesses as they piece together the details of what occurred.

No arrests have been made at this time and none of those involved have been publicly identified.

Records show Wednesday’s incident was the fourth robbery of an individual to occur in the city since Sunday.