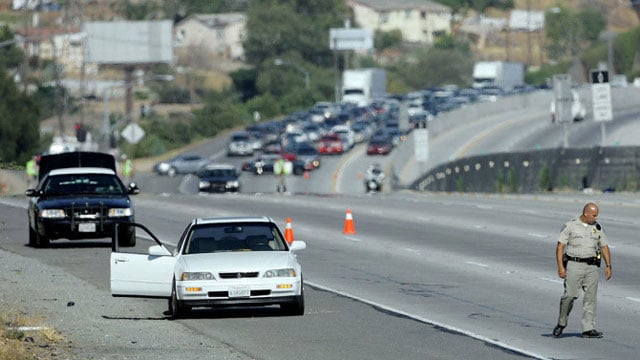 Authorities investigate a car-to-car shooting that unfolded July 14, 2013, on a freeway in Jurupa Valley, California. (Photo: The Press-Enterprise)

The freeways of California’s Bay Area have become an increasingly commonplace for gun battles over the last two years, and while authorities say some are the result of road rage other factors, the vast majority are gang-related.

There have been 100 car-to-car shootings on Bay Area freeways in the past 21 months. They have claimed the lives of eight people and left 39 injured, according to California Highway Patrol statistics gathered by local media. So far this year, the Northern California region has seen 34 freeway shootings, up from 28 last year.

Freeway shootings in the area have averaged about one per week, but this week saw two such shootings occur in as many days, the latest unfolding Tuesday night just after 10 p.m. in the Hayward area. Witnesses told authorities they observed a “person hanging out of a car window shooting at another vehicle.” In that incident, two teens suffered only minor injuries from broken glass and shrapnel, but the suspects were never apprehended.

On Monday, a man was left in critical condition when he was shot in the head in San Leandro in what authorities believe was a road rage incident.

Officer John Fransen of the CHP’s Golden Gate Division, which covers nine Bay Area counties, said although they know most of the shootings are targeted, there appears to be no definitive pattern, other than most typically occur around dusk and into the night.

Fransen is currently investigating 83 of the 100 shootings, but thus far, only 12 arrests have been made, according to reports from the Los Angeles Times. Fransen said the best tool authorities have for solving these crimes is witnesses sharing with authorities what they’ve seen, but that rarely happens.

Another major problem, according to Contra Costa County Senior Deputy District Attorney Mary Knox, is the fact that many times the CHP responds to reports of accidents on the freeway, but it isn’t until they arrive on the scene that they realize the accidents were the result of gunfire. Knox said this issue results in the loss of valuable investigative time.

One way the state hopes to solve more cases is with the addition of cameras and license plate readers along Bay Area freeways.

“We’re going to utilize every bit of tech we have at our disposal to investigate these to the fullest extent,” Fransen said.