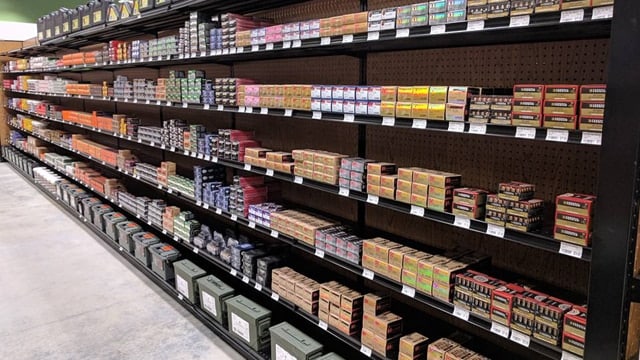 Sportsman’s Warehouse alluded to potential promotions on ammo as it chided competitors for “racing to the bottom” on gun prices. (Photo: Sportman’s Warehouse/Facebook)

Sportsman’s Warehouse alluded to potential promotions on ammunition as it chided competitors for “racing to the bottom” on gun prices during a conference call with investors this week.

CEO John Schaefer said Thursday the company resisted the widespread promotional firearms pricing blamed for dismal earnings for retailers and gun makers alike, preferring instead to lean on a customer based skewed towards use, not protection.

“In terms of pricing promotion and playing this race to the bottom that some others appear to be accepting, it’s not in our DNA,” he said. “I think if we do any promotions, it may be in the ammunition side because it is clear that while changes in firearms are usually matched after a period of time by changes in ammunition, that change has not occurred yet. It’s simply because the customer is saying the price is too high.”

Schaefer said this isn’t the first time he’s warned about overpriced ammo — particularly for high volume categories — but remains “shocked” no vendors have lowered the cost so far.

“So we may give back some margin on the ammunition side, but I see absolutely no reason to give it back on the firearm side,” he said.

Estimated gun sales plummeted 26 percent in July compared to 2016 as manufacturers and retailers predict a return to the industry’s “seasonal trends” in the non-election year.

Firearms promotions took the brunt of blame from retailers and gun makers who said the rock bottom prices ate into quarterly earnings. Some suggest the overstock — left behind after the election — could hang around until 2018, artificially propping up gun sales and keeping prices low.

This won’t be the case at Sportsman’s Warehouse, however, Schaefer told investors Thursday.

“We are in the use category strongly, not in the protection category,” he said. “And to cut prices on firearms to try to stimulate artificial growth in a period of time that both is not a high-purchase time of year — and is just before a high-purchase time of year in the September, October timeframe with hunting — simply doesn’t make sense. People don’t want to buy, they’re not going to buy.”

Sportsman’s Warehouse filed for Chapter 11 bankruptcy protection in March 2009, calling itself a “retailer victim of the worldwide global recession.” In the eight years since, the company reorganized and grew from just under two dozen locations to more than 80 stores in 22 states — mostly in the western and southeastern regions of the country. Schaefer said 12 locations will open by year’s end and another five to nine are slated for 2018.