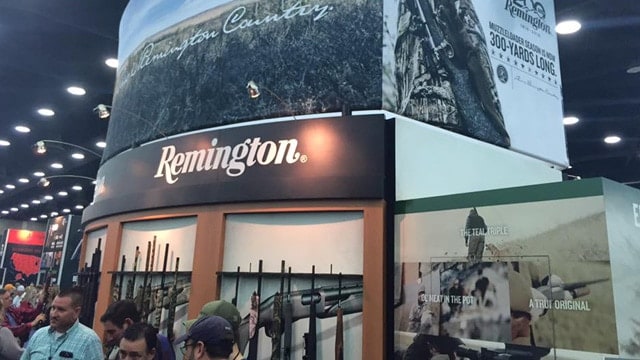 A beehive of activity at the Remington booth during the NRA show in 2016. (Photo: Remington)

Remington Outdoor Company reported this week a 24 percent drop in sales in its second quarter, putting the company deeper into the hole for the year.

With a decrease of $49.3 million in quarterly revenue, Remington is now operating at a $44.5 million loss halfway through the year, according to the company’s quarterly financial filing.

Most of the loss was carried over from the first quarter, when the company reported $35 million in impairment charges. In the second quarter, Remington saw $9.5 million added to the loss that’s also attributable to non-controlling interests.

This year for Remington trails 2016 — the biggest year on record for gun sales — by 26.2 percent. The company reported $155 million for the quarter and $312.6 million so far this year.

According to the company’s filing, the federal background checks system, used as a proxy measure for gun sales, shows a 2 percent slowdown in the quarter and 7.5 percent decrease year-to-date.

Ammunition made up the majority, 52 percent, of the quarterly total ending July 2; firearms a close second with 42 percent; and other goods made up the difference with the remaining 6 percent.

Remington executives postponed their quarterly conference call with investors from Thursday to Aug. 22, but the company’s quarter report attributes the loss to a number of factors, including reduced consumer demand, excess inventories, and an increase in firearm imports.