2 Florida cops shot and killed while on patrol 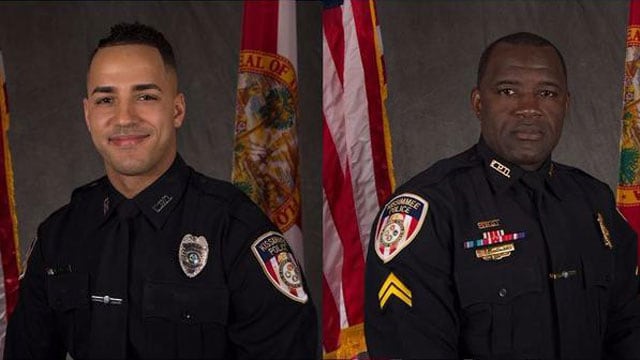 Two police officers died over the weekend from injuries they sustained after being shot while on patrol in Kissimmee, Florida.

Kissimmee Police Chief Jeff O’Dell called the shooting “another senseless tragedy” and said it’s a “tough time to be in law enforcement.”

According to O’Dell, Officer Matthew Baxter, 27, was doing proactive patrols Friday night in an area of the city that’s known for drug and other illegal activity when he noticed three people he deemed “suspicious.” Baxter radioed in his intention to make contact with the group, and Sgt. Richard “Sam” Howard, 36, who was on patrol nearby, decided to go to Baxter’s location in case he needed backup.

It’s unclear exactly how the shooting occurred, but O’Dell said there may have been a scuffle between the suspect and at least one of the officers. He also said neither Baxter or Howard had a chance to return fire.

“It looked like they were surprised,” O’Dell said of the officers.

At 9:32 p.m., approximately five minutes after Baxter’s radio transmission about the suspects, police received a 911 call stating the officers had been shot. Additional officers immediately swarmed the area, only to find Baxter and Howard lying in the street in grave condition. They were rushed to the hospital, but Baxter died a short time later. Howard died the following afternoon.

The suspect fled to a nearby bar and was found by detectives with the Osceola County Sheriff’s Office around 11:30 p.m. As they moved in to make an arrest, the suspect reached toward his waistband, but a detective quickly tackled him to the ground. Authorities recovered a 9mm and a .22 revolver from the suspect, who was later identified as Everett Glenn Miller, a 45-year-old Marine veteran.

Miller, who is being held without bond, was charged with first-degree murder, resisting arrest, and carrying a concealed weapon. Additional charges are forthcoming, since Howard’s passing.

Miller has no prior criminal record but was recently taken into custody by the sheriff’s office under the Baker Act, which allows for the involuntary commitment of individuals in the midst of a mental health crisis. It’s unclear when this took place or when Miller was released.

Baxter leaves behind a wife and four young children. Howard was the father of one child. O’Dell said both officers were wonderful family men and “the epitome of what you ask for in law enforcement officers.”

This was the first time since 1983 that an officer with the Kissimmee Police Department has been killed in the line of duty.