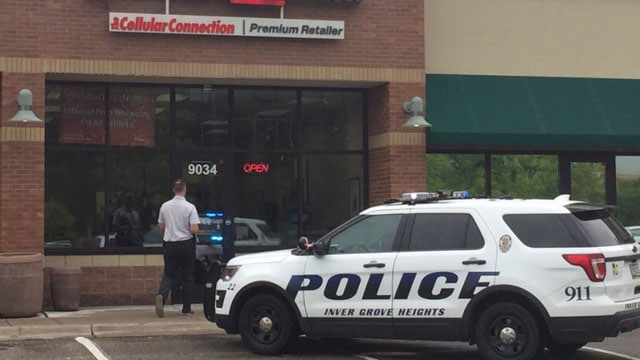 Police investigate after an attempted robbery of a cell phone store ended in an exchange of gunfire. (Photo: Pioneer Press)

One suspect remains at large while the other recovers from injuries he received when a clerk opened fire on them during an attempted robbery of a cell phone store in Inver Heights, Minnesota.

Authorities say the two suspects, one of whom was armed with a handgun, waited inside The Cellular Connection around 11 a.m. Thursday and waited for a single customer to leave the store. Once alone with the employee, the suspects made their way to a back room, pulled a gun on the employee and announced a robbery.

Grove Heights Police Lt. Joshua Otis said it’s unclear whether the suspects were after cash or cell phones, but neither walked away with either, according to the Pioneer Press.

As the employee was being held at gunpoint, he reached into his waistband and pulled his own gun. An exchange of gunfire ensued and the employee struck the suspect who was armed. The second suspect, however, took off and left his wounded accomplice behind.

When officers arrived on the scene, they found the suspect, who was later identified as 32-year-old Jamaal Marquie Mays, lying on the floor toward the back of the store. He was suffering from multiple gunshot wounds and was taken to a local hospital for treatment. As of Friday evening, he remained hospitalized in critical condition.

While Mays, who is a convicted felon with a lengthy criminal history, was initially under police guard in the hospital, authorities have since pulled the security detail. Otis appeared confident that Mays would not be going anywhere anytime soon.

“We know where he is at and where he is going to be,” Otis said. “And we can monitor his situation.”

Meanwhile, the second suspect remains at large. Authorities say he was driving a bluish-green 2000 Honda Odyssey minivan, which, according to a witness description taken from a 911 call, the minivan has dents on the rear passenger side of the hatch and the front passenger side quarter panel.

Reports from a local CBS affiliate indicate robberies in the area are rare, especially during broad daylight.

“This is the first time I’ve heard of our store being robbed like this at gunpoint,” said Otis.

No charges have been filed against the employee, who authorities confirmed has a concealed carry permit.