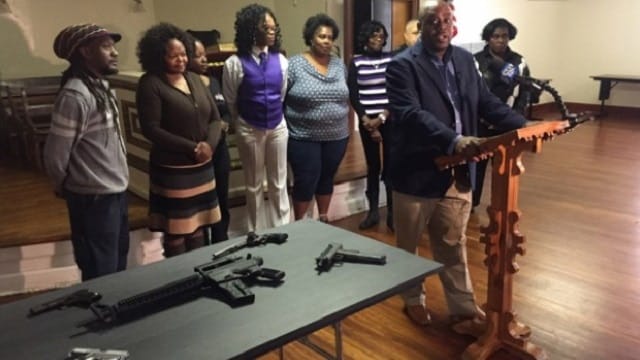 Law enforcement officials announced they will be conducting an investigation into the possible theft of firearms from a gun buyback program in Savannah.

In a press release Friday, Smith said the firearms collected by Savannah City Youth had now been turned over to the Chatham-Savannah Counter Narcotics Team during the investigation. “We’re doing safekeeping,” Smith said at a Friday news conference.

“We had concerns about it, and I had gotten calls in my office. I had worked with CNT and said to them, I think for the safety of the public, the best thing that could happen … (was that) CNT hold those (and) inventory them,” Smith said.

“To get to the truth of what some of the issues were, (I decided) to go ahead and I talked with (District Attorney) Meg Heap and she agreed to go to the GBI,” he added.

GBI Agent-in-Charge Bill Bodrey said they will investigate the allegations before deciding whether or not to open up a full case on the matter.

Savannah City Alderman Van Johnson II, who partnered with the nonprofit on the gun buyback program, said he had consulted law enforcement throughout the process and blamed “outrageous gun laws” for the limitations on how to dispose of the firearms.

“If we had laws in Georgia that protected people more than guns, then gun buy-back programs would not be necessary,” he said. “Investigations are necessary to establish facts and as the Georgia Bureau of Investigation is Georgia’s leading investigatory agency, I look forward to their findings.”

For their part, Savannah Youth City has collected around 30 weapons from Savannah youths since the program began in the fall of 2016 and aims to teach young people about the dangers of illegal firearms.

The organizations director Beverlee Trotter said the group was going to hand the guns over to police but ended up keeping and disassembling them on their own after learning Georgia law prohibits the police department from destroying the firearms. “That doesn’t make sense,” Trotter said. “If we put them back on the streets, the cycle continues.”