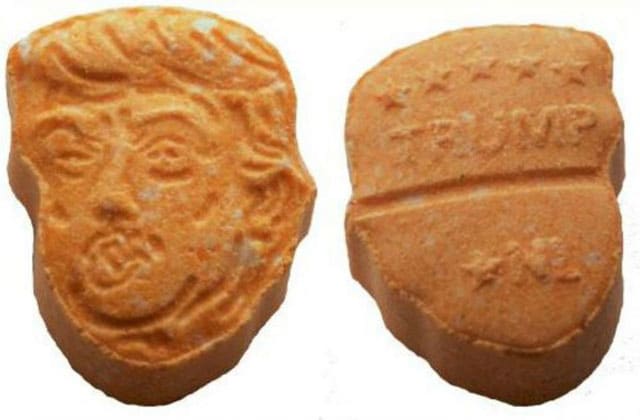 The search of a van by authorities in Osnabrück, Germany, over the weekend turned up some 5,000 ecstasy pills shaped like U.S. President Donald Trump.

The van was driven by a 51-year-old man and his 17-year-old son who claimed they were headed to Hanover after going to the Netherlands to buy a car. Police didn’t feel that was an accurate statement, and both men were arrested.

Authorities suspect the pills, which were found in the back of the van during a road check Saturday night, originated in the Netherlands. They have an approximate street value of around $45,000.

While ecstasy is a popular choice for partygoers of the younger generations, they are illegal and classified by the U.N. as a highly addictive substance.

And this wasn’t the first time Trump themes have appeared in illegal drugs in the U.K. In fact, earlier this year, similarly shaped ecstasy pills were found coming out of Amsterdam, and pills with the slogan “Trump makes partying great again” were popping up on the dark web, a type of underground Internet market known for illegal content.