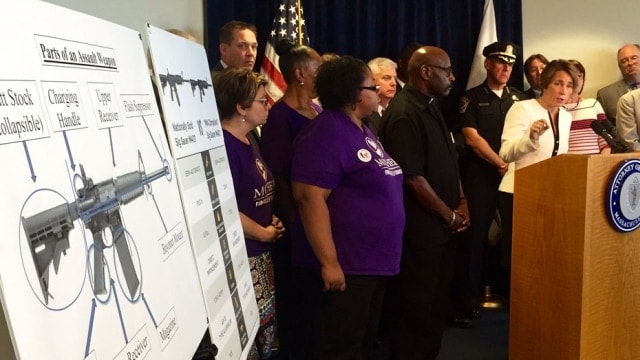 Background check applications for long guns in Massachusetts decreased by more than half in July after a last-minute ban prompted an unprecedented buying frenzy the year before.

Healey said during a press conference at the time her decision to ban “state compliant” versions of outlawed guns, including the Colt AR-15 and the Kalishnikov AK-47, was supported by the state’s 1998 assault weapons ban — a law she says the gun industry “has openly defied for nearly two decades.”

“I want to be perfectly clear — if a gun’s operating system is essentially the same as that of a banned weapon or if the gun has components that are interchangeable with those of a banned weapon, it’s a ‘copy’ or “duplicate,’ and it’s illegal,” she said. “Assault weapons prohibited under our laws cannot be altered in any way to make their sale or possession legal in Massachusetts.”

The crackdown came in the wake of the Orlando nightclub shooting that killed 49 people and injured 53 others.

“We have a moral and legal responsibility to ensure that combat-style weapons are off our streets and out of the hands of those who would use them to kill innocent people,” Healey said. “Increasingly, these guns are the weapon of choice for mass shooters, and we will do everything we can to prevent the kinds of tragedies here that have occurred in places like Orlando, San Bernardino, Newtown and Aurora.”

Since then, several Second Amendment groups and the National Shooting Sports Foundation have filed legal challenges to Healey’s ban.

“It’s been a long struggle since July,” Gun Owners Action League Executive Director Jim Wallace told MassLive in January. “Our laws were bad enough here in Massachusetts and tough enough to understand … and then suddenly, when we think we had it all figured out, on July 20, we were told we didn’t.”

“My hope is once we make clear that our civil rights need to be protected, then the state government will actually start doing its job in addressing the core issues of mental health, terrorism and crime,” he continued. “Once they realize they can’t just use our civil rights as a scapegoat, they’ll have to do the job at hand.”

Healey told WGBH Radio she “doesn’t want to take guns away from people” and is only enforcing existing state law.

“This has never been about grabbing guns from people,” she told the radio station. “I respect the Second Amendment, but we have a law on the books, and it’s an important law. It says that civilians can’t walk around with or be in possession of military-style assault weapons, weapons that were made for military use to kill as many people as possible as quickly as possible. That’s appropriate. The Legislature’s able to do that, and I believe that they acted wisely.”