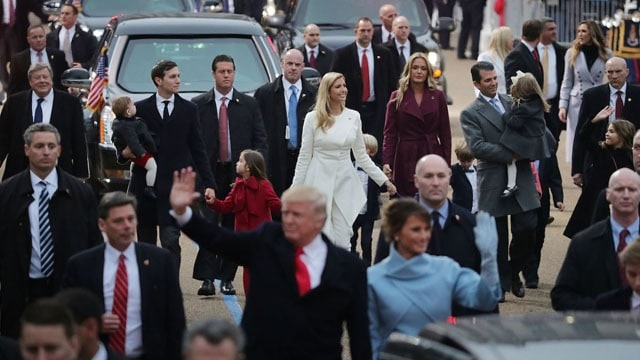 The Trump family walks down Pennsylvania Avenue in front of the White House on Inauguration Day. (Photo: Chip Somodevilla/Getty Images)

Just seven months into his presidency, the Secret Service said it has run out of money to protect President Donald Trump and his family.

Secret Service Director Randolph “Tex” Alles told USA Today the size of president’s family and their frequent trips all over the country, and the globe, has been pushed the agency to its budgetary limits “The president has a large family, and our responsibility is required in law,” Alles said. “I can’t change that. I have no flexibility.”

Alles said approximately 1,100 Secret Service employees have already hit the federally mandated salary and overtime caps that were supposed to last through the end of the year. Without approval from Congress for more funding, Alles won’t be able to pay agents for work they’ve already done, and they wouldn’t be eligible for any more overtime.

With Trump in the White House, 42 people need protection, including 18 of the president’s family members. Comparatively, with Obama in office, 31 people needed protection. However, in a statement Monday, Alles clarified that the issues have been brewing for several years due to fewer agents in the ranks and higher demand.

“This issue is not one that can be attributed to the current Administration’s protection requirements alone, but rather has been an ongoing issue for nearly a decade due to an overall increase in operational tempo,” Alles said.

Alles is asking Congress to raise the combined salary and overtime maximums from $160,000 per year to $187,000. Even if that gets approval, more than 100 agents would miss out on payment for hundreds of hours already worked. “I don’t see this changing in the near term,” Alles said. But lawmakers are trying to give the agency some relief.

“Ensuring the men and women who put their lives on the line protecting the president, his family and others every day are getting paid fairly for their work is a priority,” said Missouri Sen. Claire McCaskill, the Homeland Security Committee’s top Democrat. The panel oversees the operations of the Secret Service.

“I’m committed to working with my colleagues on both sides to get this done,” McCaskill said.

The president has been to Mar-a-Lago seven times since taking office. He’s also been to a New Jersey golf club five times, and Trump Tower in Manhattan once. The Mar-a-Lago trips are estimated to cost $3 million each. On golf cart rentals alone, the Secret Service has spent $60,000 to protect the president on his travels.