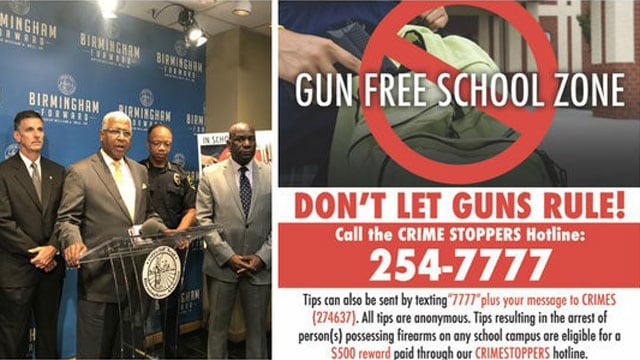 Officials in Birmingham introduced a new initiative last week aimed at keeping guns out of schools.

Over the last three years, authorities have recovered 11 guns from Birmingham schools and while Birmingham Police Chief A.C. Roper acknowledged that number is much lower than many other schools, he said, “One gun in our schools is one gun too many.”

“We also want our kids to understand they have a responsibility,” Roper added. “If someone loses their life in that school, it’s going to affect everyone who attends that school.”

In addition, authorities believe many more guns are making their way into area schools without ever being detected.

Birmingham Mayor William Bell said they want to create a safe learning environment for all students.

“Our first goal is to keep guns from coming into the schools,” he said. “The second is that if a gun is brought to school, that we have some way of finding out about that so we have a way to remove it.”

Officials distributed “In school, be cool…Don’t Let Guns Rule” flyers, which let students, staff, and anyone else know what to do if they find out about a gun in school. And any tips that lead to a confiscation could come with a reward of up to $500.

“If you’re going to complain about crime, you’re going to have to do something about it when you can. We can’t do it alone,” said David Hyche, assistant special agent in charge of ATF in Birmingham, who also noted the ultimate goal for everyone is to keep kids safe.