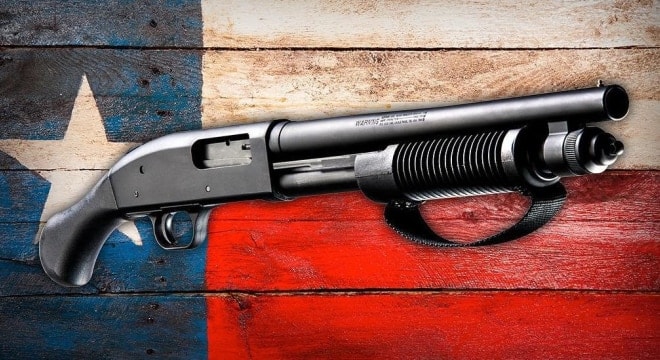 HB1819, passed by House and Senate and signed into law by Gov. Abbott in May, allows for sales of the Mossberg 590 Shockwave and similar firearms starting next month. (Photo: Mossberg)

A provision which lifts the ban on non-National Firearms Act, short-barreled firearms with a pistol grip in Texas will take effect next month.

The modification to the Lone Star State’s firearms laws, HB 1819 makes tweaks to the state’s suppressor regulations as well as making firearms such as the Mossberg 590 Shockwave legal to transfer.

While pistol grip only shotguns have been around for years, the newest idea is the 14-inch barrel “firearm” in 12 gauge that gets the job done without a tax stamp required. Traditionally, shotguns crossed over into National Firearms Act territory when they were under 26-inches overall and/or had a barrel less than 16.

Now, with guns such as the Mossberg Shockwave, introduced at SHOT Show earlier this year, and Remington’s Tac-14, debuted in April at the National Rifle Association annual meeting, manufacturers are taking shotgun-based systems still just over 26-inches long and mounting a 14-inch barrel and, as the receiver used was born a “firearm” and not a shotgun, it’s all good when it comes to the NFA– though some state and local restrictions on short-barreled or “sawn-off” shotguns still apply.

For Mossberg, who manufactures the 590 Shockwave at their facility in Eagle Pass, Texas, the ban hit close to home and the firearms giant lent a hand in helping the bill along. The legislation was also backed by the National Rifle Association and Texas State Rifle Association, passing the Senate 28-2 in May followed by a unanimous vote in the House.

“All of us at Mossberg recognize that this Bill would not have passed without the efforts of many,” said Joe Bartozzi, Mossberg’s executive vice president, and general counsel.

While Texas is set to lift their local prohibition, some states such as Oregon and others are still reportedly blocking transfers.