Trump hints at pardon for Sheriff Joe: ‘I think he’s going to be just fine’ 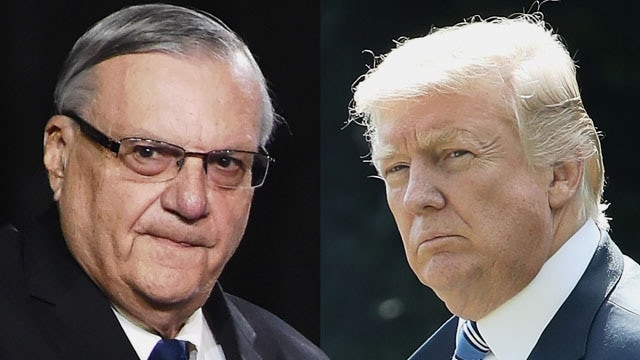 Arpaio, 85, was found guilty of criminal contempt late last month for his “flagrant disregard” of a court order that prevented him from rounding up undocumented immigrants during his time as sheriff.

At Tuesday’s rally, the president asked the crowd of supporters whether they liked Sheriff Joe. They applauded.

“So was Sheriff Joe convicted for doing his job?” Trump asked, sparking boo’s from the audience.

“He shoulda had a jury. But you know what, I’ll make a prediction: I think he’s going to be just fine,” Trump said, drawing applause.

“But I won’t do it tonight, because I don’t want to cause any controversy, is that okay?” he said. “But Sheriff Joe can feel good.”

On Twitter, the American Civil Liberties was quick to counter Trump’s assertions.

“Was Sheriff Joe convicted for doing his job?” the tweet says. “No, he was convicted for violating  court order for discriminating against Latinos.”

"Was Sheriff Joe convicted for doing his job?" No, he was convicted for violating court order for discriminating against Latinos.

In November, the no-nonsense sheriff lost his seat to Paul Penzone after more than two decades.

His contempt conviction stems from a 2007 class action lawsuit filed by a group of Latinos, who alleged his department had engaged in policies that led to discrimination against them. In 2011, a judge issued an injunction barring Arpaio “from detaining persons for further investigation without reasonable suspicion that a crime has been or is being committed.”

But Arpaio was defiant, telling the news media, “I’m still going to do what I’m doing.” He’s scheduled to be sentenced later this year, but planned to appeal and press for a jury trial.