Zero convictions for four defendants in Battle of Bunkerville retrial 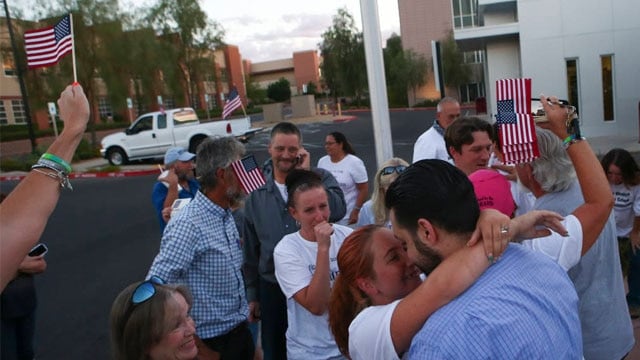 Four men facing a retrial for their role in the 2014 Battle of Bunkerville walked out of the Henderson Detention Center Tuesday in Nevada after a jury handed down zero convictions.

Montana native Richard Lovelien and Idaho resident Steven Stewart were acquitted of all 10 counts they faced, according to court records. Scott Drexler and Eric Parker, both of Idaho, were found not guilty of most of the counts against them, with the jury splitting on four counts for Parker and two for Drexler.

Lovelien and Stewart were released outright, while Drexler and Parker will have to spend time in a federal halfway house. The two men are due back in court Wednesday. It’s still unclear whether prosecutors will seek another retrial. All four had been held without bail since early last year.

The decision caps more than a monthlong trial that ended in dramatic fashion last week when defense lawyers refused to give closing arguments, depriving the prosecution of one last chance to rebut defense arguments. The jury, comprised of six men and six women, spent a little more than three days deliberating.

“What we have here is a win,” said Parker’s wife, Andrea, who was outside the courthouse celebrating Tuesday with two dozen others.

The four men had faced 10 felony charges each, including conspiracy, weapons possession, and assault on a federal officer. The charges stemmed from a tense, six-day standoff between dozens of armed ranchers and U.S. Bureau of Land Management officials in April 2014. It happened about 80 miles northeast of Las Vegas.

People came from all over the country to support Nevada rancher Cliven Bundy, who’d spent decades refusing to pay grazing fees to the federal government. BLM agents came to collect Bundy’s cattle in lieu of the payments. The incident ended when the agents retreated, and no shots were fired.

Lovelien, Stewart, Drexler, and Parker faced an initial trial earlier this year. The jury in that trial deadlocked on the charges against them in April. Two other men, Gregory Burleson and Todd Engel were found guilty in that trial. Burleson was sentenced to 68 years in prison. Another man involved in the Bunkerville standoff, Gerald DeLemus, was sentenced to more than seven years in prison after he pleaded guilty to the charges against him.

“I know he’s looking forward to a steak and a beer,” Perez said.

A total of 19 people have been arrested and charged in connection with the standoff. Bundy and two of his sons are slated to be tried later this year with two other defendants. Six others will be tried next year.