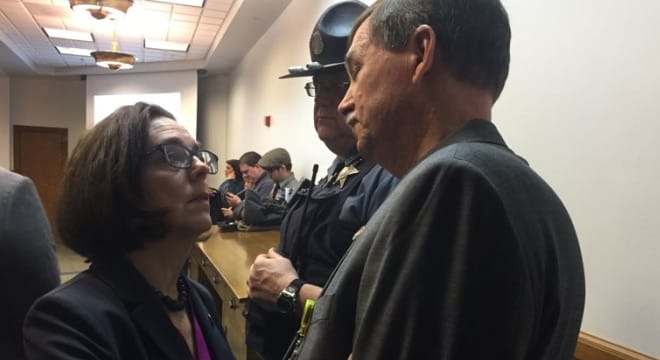 Gov. Kate Brown, D, speaks to state Sen. Brian Boquist, R-Dallas, before an April 2017 hearing on the Extreme Risk Protection Order bill at the Oregon Capitol in Salem. Boquist sponsored the legislation after the suicide of his son. (Photo: Paris Achen/Capital Bureau)

Republican House members Bill Post and Mike Nearman along with 2016 House candidate Teri Grier filed Referendum 302 this week with the Oregon Secretary of State’s office. Termed the “Say No to 719” initiative, it aims to push repeal the Senate bill of the same in its entirety.

Signed last week by Oregon Gov. Kate Brown, the controversial new law, billed as a tool to help prevent suicides, crept through the state assembly picking up only a single Republican supporter along the way.

The Extreme Risk Protection Order law allows individuals to ask a judge in a civil court to bar the subject of such an order from possessing or buying firearms or ammo for one year. It grants police enforcing the order the power to search for and seize guns that were not surrendered or stored with a third party such as a gun dealer within 24 hours. The subject of the order has 30 days to request a hearing to keep their firearms, which must be held within 21 days.

The measure is based on similar laws adopted in Washington and California in recent years.

Post said late Wednesday the backers of the repeal referendum are working on a website and petitions, posting a video of his objections to SB 719 delivered in the House earlier this year. Among his concerns voiced were that those seeking an order do not have to have mental health training or even recent contact with the subject.

“The bill creates no solutions to violence or self-destructive behavior,” Post told lawmakers, “only punishment for people who have received no due process.”

Jake Weigler, with the Oregon Alliance for Gun Safety, which championed the bill, told Oregon Public Radio the referendum effort was “disappointing” but said, “This is an opportunity to educate the broader public about this new policy that we think is an important tool to reduce gun violence, particularly gun suicide in Oregon.”

As is standard for statutory referendum in Oregon, the initiative must receive 58,789 signatures from registered voters no later than Oct. 5 to qualify for the 2018 general election ballot. Grier posted to social media that she will begin distributing petitions as early as Thursday.