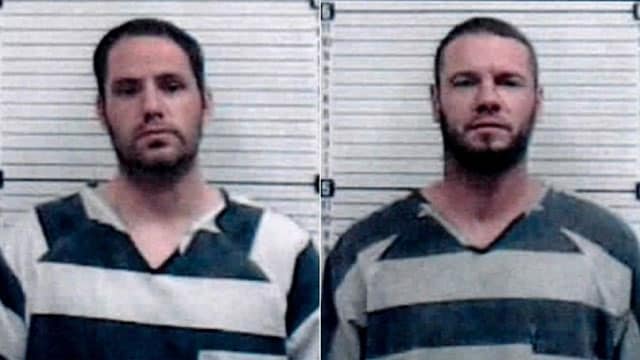 Andrew Jason Foy, left, and Darren Walp have been on the run for more than two days.  (Photo: Major County Sheriff’s Office)

Authorities continue to search for two convicts who escaped after overpowering guards during a prisoner transport early Tuesday morning in Northwest Oklahoma.

The two inmates were spotted at a gas station in Sapulpa, Oklahoma, around 1:40 a.m. Thursday, according to a press release from the sheriff’s office. They were driving a black 2007 Peterbilt tractor-trailer, which was reported stolen late Tuesday or early Wednesday from El Reno, about 30 miles from where the escape originated.

Authorities say Foy and Walp were among half a dozen inmates being transported through a private transport company at the time of their escape. The company had stops in Oklahoma, Colorado, Wyoming, and Kansas.

Major County Sheriff Steven Randolph said around 3:30 a.m., Foy and Walp grabbed the driver and ordered him to continue driving about a mile down a rural county road. The two then instructed the transport officers to stop the van and told the other inmates that they had the option of either getting out of the van or escaping with them. All four inmates got out of the van.

Before taking off in the van, Foy and Walp stole the officers’ cellphones and cash, as well as a duty belt that was later recovered with an empty holster, a local Fox affiliate reported. It’s unclear where the duty belt was at the time of the transport, but Randolph confirmed that neither officer was armed when Foy and Walp attacked, and therefore they did not fight back or otherwise resist.

The transport van was recovered later Tuesday about 20 miles from where Foy and Walp left the other inmates and the officers. After ditching the van, the convicts stole a Dodge Ram pickup truck from an oil field service company. According to The Oklahoman, the pickup truck has not been recovered, but Randolph confirmed they believe the two are no longer driving that truck.

Once apprehended, Foy and Walp will face charges for kidnapping, escape, robbery, unauthorized use of a motor vehicle, and assault and battery with intent to commit a felony, with a bond set for $1 million each, Randolph said.

Anyone with information is asked to contact the Major County Sheriff’s Office at 580-227-4471.