Remington board dissatisfied with company performance 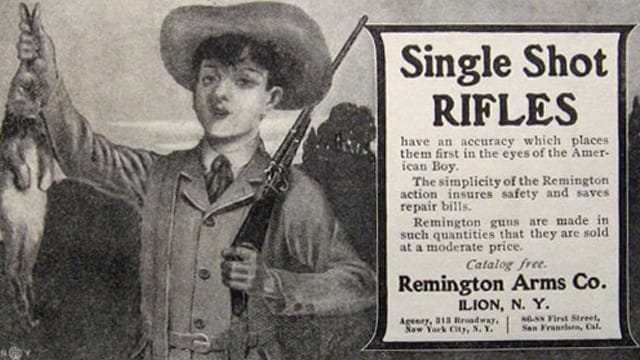 A Remington Arms advertisement from a simpler time — when boys wore suits and hats to hunt rabbits. (Image: Pinterest)

“Neither the board nor I are satisfied with our first half 2017 financial performance,” said James Geisler, executive chairman of the board for Remington Outdoor Company, during Tuesday’s conference call with investors.

The company reported a $9.5 million loss for the quarter ending July 2 due to high inventory levels coupled with low demand. That brings the total loss this year to $44.5 million, which is largely due to impairment costs.

Geisler explained Remington has had a weak couple of quarters, but they’re in line with cyclical patterns following an election cycle. Historically, gun sales decline starting in the spring and hit a low point in the summer, but see an uptick just before hunting season and peak around holiday shopping.

Six months into the calendar year, gun sales have only declined 7.6 percent nationwide and sales for long guns — rifles and shotguns, which Remington mainly produces — also declined by 7.6 percent, federal data shows. For Remington, that translates as a 29 percent drop in firearm sales and 20 percent drop in ammo sales.

Remington — along with the rest of the industry — anticipated opposite results from November’s presidential election and prepared higher inventory levels expecting continued elevated sales. The low demand has clogged inventory channels, which makes it harder for manufacturers to move products. But Remington’s chief financial officer Steve Jackson expects channels to normalize around year’s end.

“As we look at our inventory, we’ve initiated plans and working with our customers to continue to drive inventories down through the end of this year and that might linger into the first part of next year but we continue to target end of the year,” Jackson said about moving the company’s firearm inventory.

With a 13.5 percent decline, Remington ammo sales suffered a less severe hit than firearms. The company explained the impact was a result of an increase in ammunition imports by competitors.

Competitor Sturm, Ruger & Company reported a similar quarterly performance with a 22 percent drop in sales, but executives were less confident about when the industry would even out. “I don’t know where that new normal is going to shake out at,” said Ruger CEO Chris Killoy this month.

During Tuesday’s call, Remington described its operational capabilities as topnotch after completing a project last year to consolidate manufacturing efforts to Alabama, but also addressed concerns about its ability to borrow money and pay bondholders in the coming years. In July, Moody’s Investment Services downgraded Remington’s credit rating and raised the probability the company will default on an $800 million loan in 2019.

“I believe Remington’s position is solid,” Geisler told investors. “We have meaningful liquidity with $50 million of borrowing capacity on our revolver as we exit our typical seasonal peak revolver usage. The company continues to receive support from its banks.”