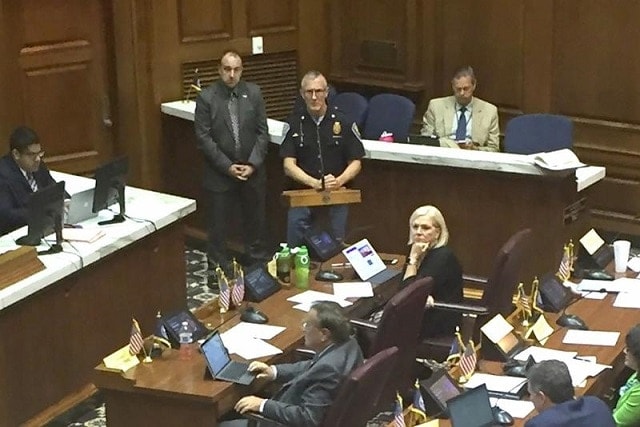 Several police organizations have voiced their opposition to proposal that would allow lawful gun owners in Indiana to carry without first obtaining a permit.

The police groups spoke out against the proposal at Tuesday’s Judiciary and Public Policy hearing in the Indiana legislature and asked lawmakers to keep the permit law in place, the Associated Press reported.

State Police Maj. Mike White argued that repealing the permit requirement could put police at greater risk, noting that a few thousand prohibited possessors are denied permits each year during the process.

“Any sort of vetting that we can do and assure that even that one person that shouldn’t be carrying doesn’t carry, that’s what we need to do,” White said.

Backing the proposal, Republican Rep. Jim Lucas said law-abiding citizens shouldn’t have to get a permit just to exercise their constitutional rights.

“We have the state that is forcing an innocent person to get online, apply for a license, go get fingerprinted,” Lucas said. “They have to take a half day off work or a full day and pay a fee to the state to exercise a constitutional right.”

Rob Wiley, the Kendallville Police Chief and former president of the Indiana Association of Police Chiefs, argued the permitting system was a reasonable process and not the loathsome burden some have made it out to be.

“The law that is currently in existence in Indiana is a very Second Amendment friendly law, quite frankly, while still allowing law enforcement to do what it needs to do, which is protect the general public,” Wiley said.

Other committee meetings have been scheduled for September and October, at which lawmakers will decide whether to consider the proposal in the next legislative session.