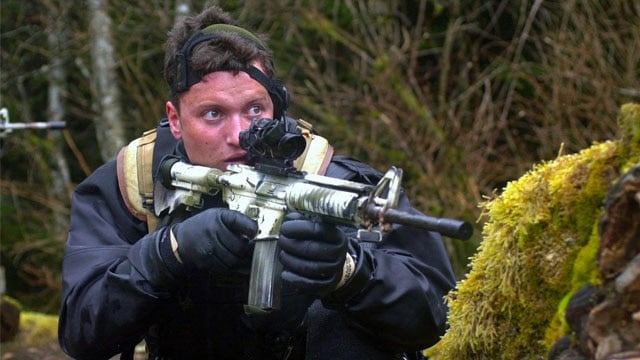 A former Navy SEAL who wrote a book about shooting Osama bin Laden will be able to continue with a lawsuit against the attorney he claims gave him faulty advice.

A federal judge in Indiana denied a defense motion Monday to throw out the suit brought by Matt Bissonnette, pen name Mark Owen, who wrote No Easy Day: The Firsthand Account of the Mission that Killed Osama Bin Laden, which was released in September 2012, and hit the New York Times bestseller list.

According to court documents, Bissonnette retained attorney Kevin Podlaski and his law firm to help ensure the author was complying with nondisclosure agreements he’d entered into with the U.S. Government, and to be sure the book didn’t include classified or sensitive information that would compromise the national security interests of the United States.

Bissonnette says Podlaski told him not to submit the book to the government for a prepublication review. Podlaski read the manuscript and assured the publisher it “contained no classified or otherwise sensitive information; that it would not breach Bissonnette’s personal, contractual, or fiduciary obligations; and that it would not result in civil or criminal exposure,” according to court records.

The day before the book’s scheduled release, after tens of thousands of copies had been printed and sent to stores nationwide, Bissonnette got a letter from Jeh Johnson, the general counsel for the Department of Defense. Johnson said the book was in violation of Bissonnette’s obligation to submit the book for prepublication review. Podlaski dismissed the letter and “said not to worry,” according to court documents. He said the accusations “may increase the book’s sales.”

After the book came out, the Defense Department threatened Bissonnette with a civil suit, and the Justice Department opened a criminal investigation. Last week, the Pentagon settled with Bissonnette after a years-long legal battle in which the government claimed he revealed secrets harmful to national security. As part of that settlement, Bissonnette will have forfeit $6.7 million in earnings from the tell-all. He also has to pay more than a million dollars in legal fees.

“After the initial accusations of me leaking all that classified stuff…they found nothing,” Bissonnette told The Daily Beast. “They were just upset with me and wanted to get me one way or another. For four years, they looked into every little thing. Now…one signature and it all goes away.”

Still, SEAL and Special Operations leaders criticized Bissonnette for violating the ethos of the secretive teams. In a statement, Bissonnette addressed those criticisms.

“I acted on the advice of my former attorney, but I now fully recognize that his advice was wrong,” he said. “I apologize for my lapse. It was a serious error that I urge others not to repeat. Although I never intended to endanger my former colleagues, I now recognize that failing to seek prepublication review could place them and their families at greater risk, for which I especially apologize.”

The Obama administration was criticized for taking legal action against a Navy SEAL who risked his life to take down the world’s most wanted man. Bissonnette, who was wounded during the 2011 raid that killed bin Laden, was later awarded the Purple Heart. During one probe led by the Naval Criminal Investigative Service, he turned over a hard drive which allegedly included an unauthorized photo of the terror leader’s corpse.

Justice Department spokeswoman Nicole Navas said last week’s settlement, which mandates Bissonnette pay all past and future proceeds from his book, is not meant to be a blemish on his military service.

“This enforcement action does not discredit Mr. Bissonnette’s military service, but reinforces that it is important for our service members….to protect classified information after leaving the U.S. military and government in an effort to protect our nation’s national security,” Navas said.

But in Bissonnette’s lawsuit against Podlaski, attorneys insist that’s one of several negative outcomes of Podlaski’s advice.

“As a direct and proximate cause of Defendants’ faulty legal advice, Bissonnette’s reputation and his exemplary military record have been tarnished by false accusations and Bissonnette will lose his security clearance,” court documents say. “Bissonnette has lost a significant amount of income he otherwise would have received following his retirement from the military by way of consulting jobs, speaking engagements, and future employment.”

Bissonnette, through his attorneys, says even if he would have submitted the book for prepublication review, and the Department of Defense had refused to clear it, the outcome still “would have been more favorable.”