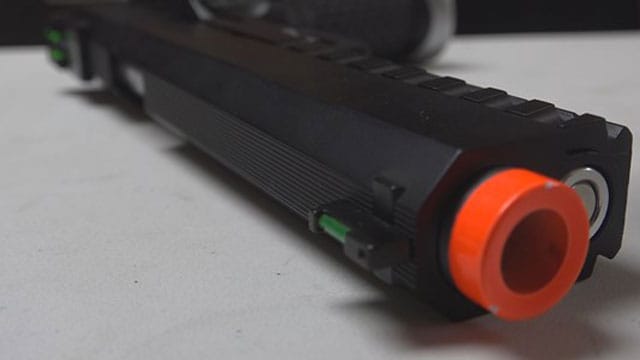 The orange tip is there for a reason, but still, they are often removed. (Photo: THV 11)

Following an officer-involved shooting death of a BB gun-wielding teen in Marion, Arkansas, last month, law enforcement officials are once again speaking up about gun safety, especially where it concerns fake guns and kids.

According to reports from THV 11, the Sherwood Police Department said they have seen an increase in an extremely dangerous trend: Removing the orange tip from airsoft, BB, and even toy guns.

While federal law requires such guns be sold with an orange safety tip as a visible sign that they aren’t real, the orange tips are frequently removed or painted black, and most often by kids. Why? To make the guns seem more real, but therein lies the biggest problem.

Sherwood Police Sgt. Keith Wilson said law enforcement officers sometimes have a split second to determine whether the gun a subject has is real or fake.

“Even with all the training we have it’s hard to tell, and an officer is not going to sit there, if their life is in danger, and take a timeout to determine whether a gun is fake or not,” Wilson said.

One such case was that of 12-year-old Tamir Rice, who was fatally shot at a Cleveland park in 2014 after officers responded to a call about a kid terrorizing people in the park by pointing a gun at them as they passed. The caller told the 911 dispatcher that she believed the gun was probably fake.

Nonetheless, responding officers opened fire within seconds of arriving on the scene. The gunfire erupted as officers instructed Tamir to raise his hands, but he instead reached for his waistband to grab the gun, which was later confirmed to be an Airsoft pistol that he borrowed from a friend.

“Talk to your kids,” Wilson said. “Let them know there are some consequences, and be careful with what you’re doing.”