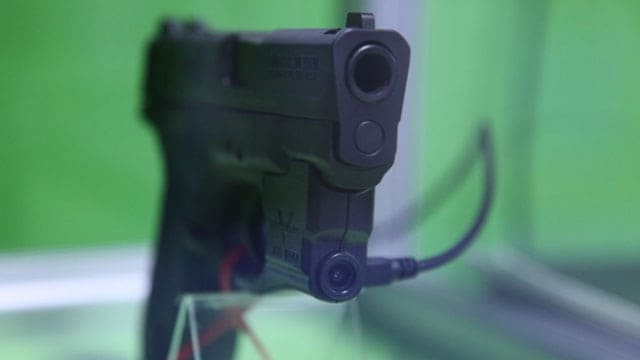 The Fact Micro (pictured) is a commercial use version of the Fact Duty, which is being sold exclusively to law enforcement. (Photo: Brian Seay/Guns.com)

A small police department outside Minneapolis is testing out an alternative to the ever more prevalent body camera.

The West Hennepin Public Safety Department, which has eight officers serving some 5,000 residents, is testing the Viridian weapon-mounted camera, according to KSTP.

Since 2009, there have been 150 police involved shootings that have resulted in injury or death across Minnesota, according to Bureau of Criminal Apprehension data. When an Australian woman was shot and killed by an officer in Minneapolis last month, neither police body cameras nor dash cams were rolling during the incident.

That’s where the gun-mounted cameras come in. Guns.com got a sneak peek at the product earlier this year at the SHOT Show in Las Vegas. There, retired law enforcement officer and Viridian representative Josh Sheahan noted how officers’ arms can get in the way of a body camera when they draw their weapons, blocking the view of the lens. That doesn’t happen with the gun-mounted unit. And that’s not the only unique feature.

“The camera is activated immediately when the gun is drawn from the holster and that’s what makes this unique,” said Brian Hedeen, the president of Viridian Weapon Tech.

The small camera fits on the rail of officers’ service weapons, and records whatever the muzzle is pointed at. It weighs just 3.3 ounces, captures high definition video, and can record for more than three hours on a single charge.

On its website, Viridian outlines projected body camera costs to be around $3,140 for five years of use. For Viridian’s gun-mounted unit – the Fact Duty – there are no data and software storage costs, and the unit ends up costing $500 for law enforcement for one officer during the same five year period.

“It allows for human error or mistakes to not occur,” he said. “We’re all human and in this particular case anytime you pull your weapon out it could be a deadly force situation so we’d like to have that on video.”

“That’s our goal, is to help a lot of the current problems we’ve been having, where we don’t really know what happened,” Hedeen said.