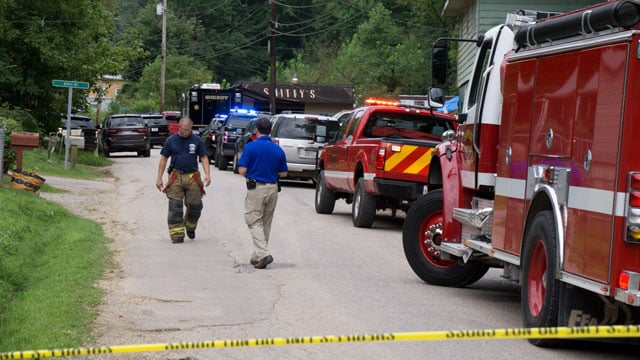 A 53-year-old man was fatally shot outside of an auto parts business in Sissonville, West Virginia, Tuesday afternoon, and witnesses say in the minutes leading up to the shooting, the deceased man was acting erratically while wielding several knives.

Sgt. Brian Humphreys, spokesman for the Kanawha County Sheriff’s Office, confirmed that no one is in custody at this time, and the initial investigation indicates the shooting was an act of self-defense, local media reported.

The deceased man was identified as Tracy Stalnaker, but the man who fired the fatal shot has not been publicly identified.

According to reports, about 15 minutes before the deadly altercation, Stalnaker was involved in another incident at a local bar. Debbie Carpenter, manager of Raw Bar II, told the Charleston Gazette-Mail that Stalnaker tried to enter the bar with a tall can of Budweiser, but she told him he needed to get rid of it.

Stalnaker left, but Carpenter said when he returned, she noticed he had a large knife in his waistband. A short time later, she realized there was not just one, but several knives in his waistband. Soon thereafter, Stalnaker grabbed one knife in each hand and threatened the bar owner.

“He was never right,” Carpenter said. “But today he was really messed up in the head.”

From the bar, Stalnaker made his way to a neighborhood, and that’s where Dylan Bay spotted him while looking out of his window. Bay told reporters he was acquainted with Stalnaker and could tell that something was awry. So Bay went to the window and asked him if he needed a glass of water.

Stalnaker, however, reacted to the offer by pulling out a knife. Bay said the man was acting crazy and at one point even stabbed his garage, leaving a large gash in the door.

Bay said during this time a man who works across the street at Smitty’s Auto Parts heard the commotion, walked outside, and yelled at Stalnaker to leave Bay alone. Stalnaker then turned his attention toward that man, charging at him while still holding the knife.

A brief altercation ensued before the man pulled out a gun and fired a single shot, striking Stalnaker, who was pronounced dead at the scene.

Bay believes the man’s actions were justified and he was only trying to protect everyone. However, Stalnaker’s family, who said he suffers from mental illness, feels deadly force was unnecessary. Lizzie Atkinson, Stalnaker’s sister-in-law, said she doubts things were really that bad, but suggested shooting Stalnaker in the arm or leg rather than taking his life.

“He had problems,” Atkinson said, “but he wouldn’t hurt nobody.”