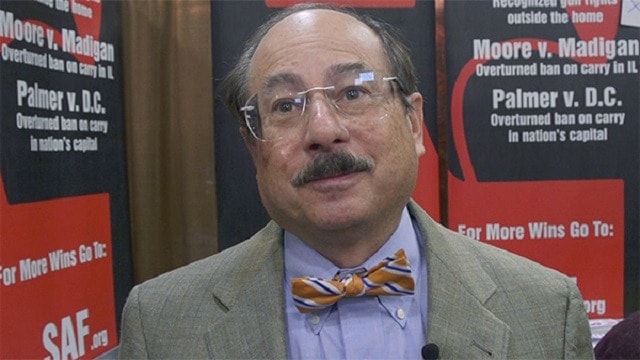 The Second Amendment Foundation, one of the largest gun advocacy groups in the country, has come out and said they won’t support armed political protests.

While the foundation has represented gun owners in some major cases in recent years, founder and executive vice president Alan Gottlieb told the Washington Times this week that armed public protests are something they can’t defend.

“We are not a fan of armed protests and highly discourage that,” said Gottlieb. “Firearms serve a purpose, and the purpose is not a mouthpiece. It’s to defend yourself. If you are carrying it to make a political point, we are not going to support that.”

Gottlieb’s statement comes in the aftermath of the violent Charlottesville protests, in which groups of neo-Nazis and white supremacists clashed with counter protesters earlier this month. The protests took a deadly turn when a neo-Nazi drove a car into a group of counter-protesters, killing 32-year-old Heather Heyer and injuring 19 others.

Though no one was shot at the rally, some have said protesters openly carrying firearms only escalated an already tense situation.

“There are many in the gun community who believe the open carriers pose a big threat to gun rights because they are so aggressive and so in the face of other people in controversial settings that it could lead to a backlash,” said Adam Winkler, a gun rights expert and constitutional law professor at the UCLA.

After the mayhem in Charlottesville, the American Civil Liberties Union, which represented the “Unite the Right” organizers as they sought a permit for their rally, announced they would no longer represent white supremacist groups planning to protest with firearms.

Lawmakers in Virginia and Pennsylvania have also vowed to take action against armed protesters, saying they would introduce legislation to ban guns at public demonstrations.

While Gottlieb and the SAF won’t support armed protests, he said the foundation would still consider defending someone who was lawfully carrying a firearm for self-defense at a rally and was disarmed or arrested by law enforcement.

Erich Pratt, executive director of Gun Owners of America, said that while his organization does not specialize in First Amendment issues and so has not brought any legal cases regarding armed protests, they would publicly defend a group’s right to protest with guns, so long as the group had peaceful intentions.

Pratt also said that GOA would oppose any legislation that aims to ban guns from public demonstrations.