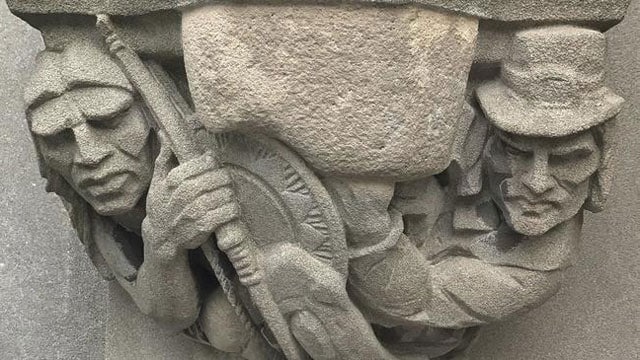 Yale University officials announced this week that the removal of a controversial carving on an 88-year-old building is imminent.

The carving, which is displayed in the doorway of the Sterling Memorial Library, depicts a Puritan settler aiming a musket at an Indian. The musket, however, was covered with temporary stonework last year.

The carving has been in the same doorway since 1929, but that particular entrance was rarely used. However, the doorway recently became the main entrance for the Center for Teaching and Learning and, as a result, the carving became a topic of controversy.

But instead of being destroyed, the carving will be removed from the building and displayed for public viewing. The temporary stonework covering the musket will also be removed, but the location of the carving’s new home has not yet been determined.

“We cannot make alterations to works of art on our campus,” Yale President Peter Salovey said in a statement. “Such alteration represents an erasure of history, which is entirely inappropriate at a university. We are obligated to allow students and others to view such images, even when they are offensive, and to study and learn from them.”

Regardless, university officials expressed concern that, left as is, the carving would not simply be a piece of history but rather give an aura of “honor that it does not deserve.”