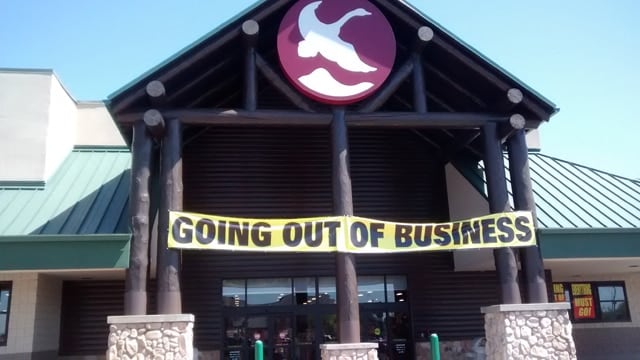 Gander Mountains across the country closed their doors for good Sunday after the months-long liquidation sale ended.

Less than half of the sporting goods chain’s 162 locations will reopen later this year as Gander Outdoors, the re-branded effort led by Camping World CEO and star of “The Profit” Marcus Lemonis.

“I spent a day talking to a number of store managers and customers who have said that the current most recent management at Gander got really away from its core customer and really bet a $100 million on guns and was wrong,” he told investors in May.”Terrible, terrible inventory, terrible overhead, and candidly they didn’t need 160 stores.”

Camping World, the nation’s largest recreational vehicle dealer, led the investor group that bought out $390 million worth of Gander Mountain assets, including its Overtons boating business, during an April 28 auction for $38 million.

In the weeks following, Lemonis changed the company’s name to Gander Outdoors, crowd-sourced a new logo and maintained an evolving list of surviving locations — down to 57 from a planned 70 — on his Twitter account. Meanwhile, the newly-branded company announced a slew of new product offerings designed to deliver on Lemonis’s promise to offer a larger assortment of guns at better prices.