The gun industry's woes a boon for buyers 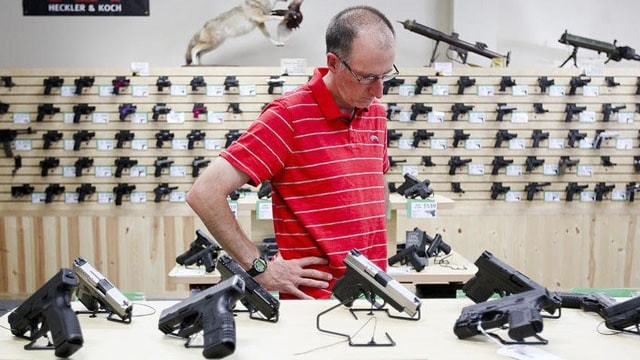 Financial advisers warned last week gun stocks could be too risky to hold, as major manufacturers and retailers report depressed earnings and lowered expectations — without a tangible end in sight.

It’s good news for guns owners, who can expect the rock bottom prices to linger around a bit longer, even as the industry slides back into its historically strongest seasons.

“This will be an amazing time to be a gun owner, but a bad time to be a gun investor,” said Maks F.S., an investment advisor and contributor at Seeking Alpha, in an analysis of gun stocks Friday. “The firearms manufacturers and distributors bet on the wrong horse in the elections and produced a glut of firearms that must now be sold into a market with declining year-over-year demand.”

Estimated gun sales through July 2017 trail last year, the biggest on record, by 10 percent, according to FBI data. Despite busier-than-expected months for federal background checks — and by proxy, gun sales — in the spring, transfers in June and July tanked 12 percent and 26 percent, respectively.

“I’ve been in the industry for more than 40 years and this is the most unique retail environment I’ve ever seen,” said Michael Callahan, Vista Outdoor’s interim CEO, earlier this month. “We’re seeing unprecedented change and it’s not likely to go back.”

American Outdoor Brands, Vista and Sturm, Ruger and Company all saw declining stock in the wake of weak earnings reports and uncertainty surrounding the continued promotional sales environment — including those at retailers like Dick’s Sporting Goods and Cabela’s.

“I don’t know where that new normal is going to shake out at,” said Chris Killoy, president, CEO and director of Ruger in a conference call with investors earlier this month, regarding firearm demand under a new presidential administration. “We see some good long-term trends that we haven’t seen maybe in the past.”

Although AOBC raked in a record-breaking $903.2 million through the end of the fourth quarter, a 25 percent increase overall, CEO Jeff Debney warns the promotional environment will eat into 2018’s bottom line by as much as 17 percent. The company will release its first quarter earnings next month.

The industry’s overall pessimistic tone hasn’t gone unnoticed by those betting on its success, however.

“Investors, at least institutional investors, seemed to have opened up their eyes and have started dumping shares,” Maks F.S. said. “From the technical analysis point of view, the stocks present themselves as risky propositions to hold and, in my opinion, have more substantial downside risk than upside exposure.”

Other analysts say gun makers, like Ruger, helped create the current industry-wide “malaise” by donating more than $5 million to the National Rifle Association, who subsequently poured more than $50 million into campaigns for President Donald Trump and other congressional Republicans.

“Make no mistake, Ruger wasn’t wrong to support an electoral campaign that promised to improve the long-term health of the firearms industry,” said Rich Duprey, a financial writer and contributor at Motley Fool. “It might sell more guns in an administration in which the threat of gun control is prominent, but if those fears turned to reality, Ruger and other gunmakers would be hurt. The industry is better off with an administration that supports gun ownership. Ruger is simply a case of reaping what it sowed.”

“Ruger’s stock has lost 24 percent of its value this year, but at 13 times earnings and less than 12 times next year’s estimates, it may be at a value that’s too good to pass up,” Duprey said. “It is walking with a limp at the moment from having shot itself in the foot with its electoral campaign promotion, but it will be that much stronger after the current bit of pain wears off.”