Man arrested for firing round during clashes at Charlottesville rally 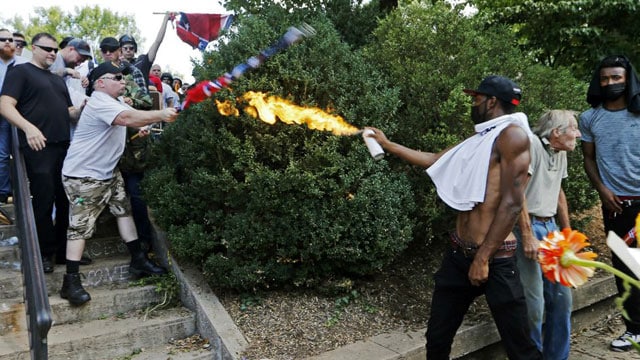 A man was arrested on gun charges Saturday after he fired a round at another man holding a makeshift blowtorch at a white nationalist rally in Charlottesville earlier this month. (Photo: AP)

A 52-year-old man was arrested Saturday after authorities received a video showing the man fire a single shot during the white nationalist rally in Charlottesville earlier this month.

Richard Wilson Preston is charged with discharging a firearm within 1,000 feet of a school and being held at the Baltimore County Detention Center.

The gunfire unfolded as tensions mounted between white nationalists and counter protesters during the Aug. 12 “Unite the Right” rally in Emancipation Park. Authorities began investigating several days later after the American Civil Liberties Union of Virginia shared a video of the shooting incident with local, state, and federal authorities.

“Our decision to release the video of this significant event is consistent with our regular calls for law enforcement to release body-camera video that depicts any incident of public concern,” ACLU of Virginia wrote in a statement.

The video was recorded by an ACLU legal observer and shows Preston pull a handgun from his holster after observing a counter protester with a makeshift blowtorch made from an aerosol can and a lighter. Preston raised the gun, then lowered it, before raising it a second time, and firing a single round toward the man with the flaming torch. Preston then re-holstered his handgun, turned, and walked away. The shot did not cause any injuries.

Virginia State Police were standing behind barricades not far from where the shot was fired, but appeared to have no reaction. According to state police spokeswoman Corrine Geller, none of the officers witnessed the shooting.

“Nor did they hear the single shot being fired because it was muffled by the loud volume of the crowd yelling and chanting, drums and music,” Geller said, according to reports from The Daily Progress. “Had any one of our troopers witnessed that incident, they would have immediately acted, just as they did for the other four arrests made during the weekend.”

Police response – or what some see as the lack thereof – during the rally and subsequent violent clashes has been criticized immensely over the last two weeks.

Likewise, following the release of the video, which coincided with Preston’s arrest, Everytown for Gun Safety took the opportunity to condemn open carry.

“In a matter of seconds, the gunman went from legally openly carrying, to breaking the law & shooting in the direction of a group of people,” the gun control group wrote in a Facebook post Saturday. “Fortunately, no one was struck by a bullet, but this incident underscores the purpose of open carry: to intimidate, terrorize & silence.”

While calling for an end to open carry, the group goes on to say, “Hate and open carry are a toxic combination, and white supremacists have a long history of using guns to terrorize marginalized communities. Open carry introduces terror and intimidation in places where dialogue and debate should prevail.”

There has been no word of charges for the man holding the homemade blowtorch.