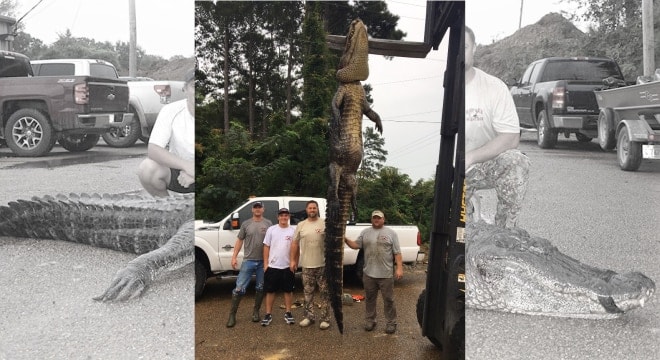 The Mississippi Department of Wildlife, Fisheries, and Parks announced the new male alligator length record of 14-feet, 3/4 inch, besting the old record set last year by a half-inch. MDWFP Alligator Program Coordinator Ricky Flynt certified the gator at 766.5-pounds with a belly girth was 69 inches, and the tail girth was 43 inches. It was bagged by the hunting party of Bryan Burnside near Natchez, with the sportsmen shown posing with the oversized animal in a release from MDWFP.

Officials did not state how the gator was caught, but centerfire rifles, shotguns, and bangsticks larger than .38 caliber can be used on private lands for daytime hunting and in dispatching those caught at night by rod or hook in controlled areas.

The record for the heaviest, an 822-pound lizard that only went 13.5-pounds caught in 2015 around Natchez, still stands.

The season in public waters began last week and is set to run through the Labor Day weekend with 920 permits in seven hunting zones issued. Some 4,140 applicants vied for the random drawings. Gator licenses are $25, with a $200 possession permit required for landed animals.