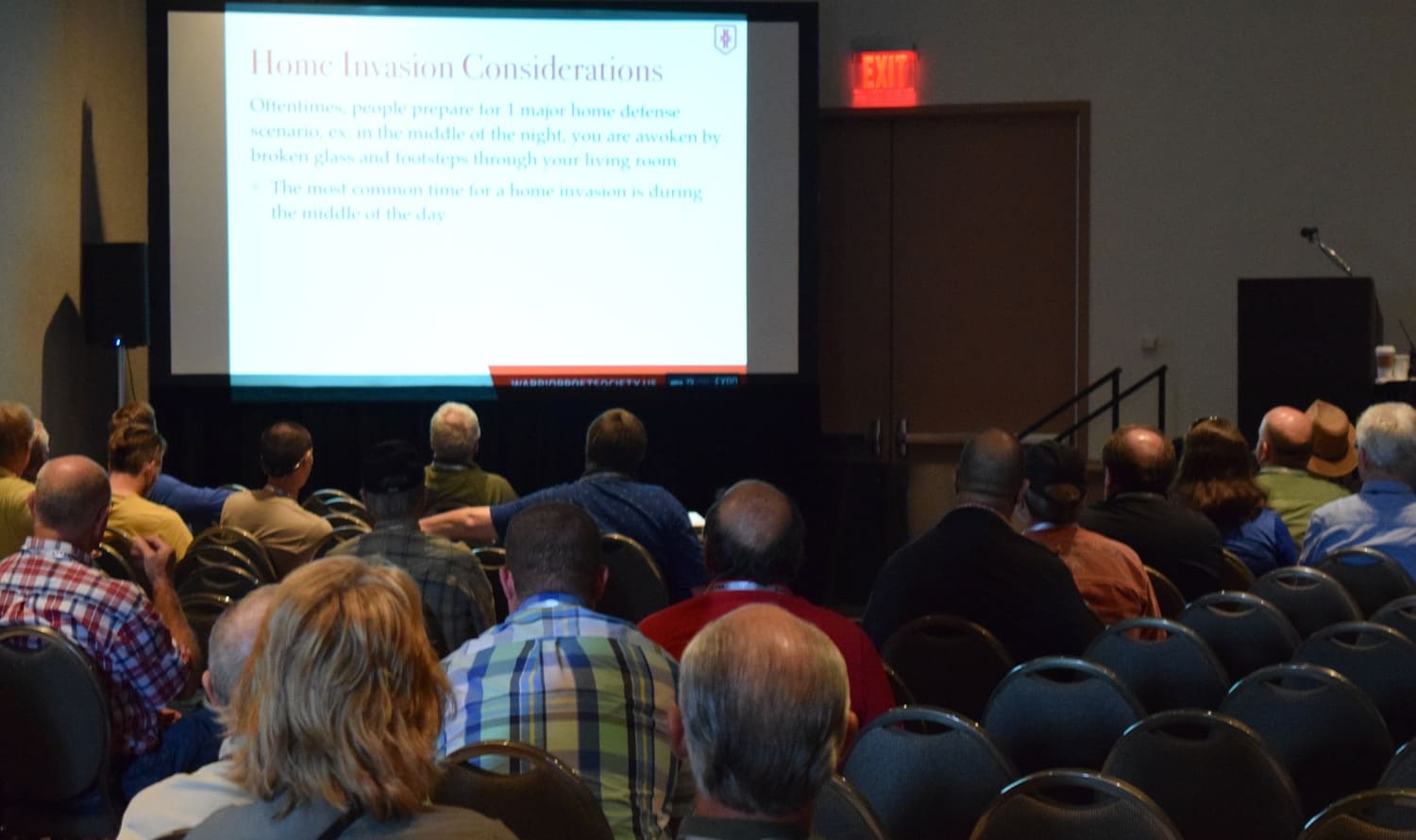 What to consider during a home invasion? A few people wanted to know during the NRA Carry Guard Expo in Milwaukee on Aug. 25, 2017. (Photo: Daniel Terrill/Guns.com)

The NRA hosted its first ever Carry Guard Expo in Milwaukee last week and while much of the hubbub surrounded products on the show floor, the fashion show, or the Southern Uprising concert, it was the (mostly) quiet classrooms surrounding the Expo that impressed attendees most. With over 140 seminars, workshops, and courses, there truly was something for everybody.  Guns.com had the opportunity to attend a number of seminars.  Here are some important takeaways you need to know.

1. There is a Best Home Defense Gun

John Lovell’s seminar may have quantified that an AR-rifle makes an ideal home defense gun based on low recoil and high firepower round capacity.  But the biggest takeaway from his course titled “Choosing the Right Home Defense Gun” made it clear that while there is no single correct choice for every person, there are some important factors in making the selection that is best for you.

For lethality, a shotgun with double-00 buck cannot be beat.  AR Rifles may hold the most rounds and have the least recoil, but over-penetration is always a concern.  And pistols, the overwhelming favorite of those in attendance, may be the most concealable but are also the most difficult to fire accurately under pressure without significant training. There’s no substitute for familiarity with your chosen weapon and never too much training.

2. The NRA and Marital Arts are not that far removed

Royce Gracie, the Brazilian Jiu-Jitsu expert and UFC Fighting Champion who has trained the likes of Chuck Norris and other television tacticians, provided a seminar entitled “Brazilian Jiu-Jitsu: Self Defense Techniques”  to a crowd of predominantly fans and martial arts beginners.

Gracie welcomed attendees to the red mat, where they took turns taking down their “opponents.”  The caveat, and a good one at that, was to remove the otherwise allowed concealed carry weapons for the safety of all participants tumbling around mat.  The art and idea of using the enemy’s force against them with a mix of leverage and manipulation is another tool in the arsenal of a prepared citizen.

A separate show floor booth on the martial art of Hojutsu-Ryu introduced a blend of firearms with traditional martial arts weapons.  The moral of this story is that different disciplines of self defense and preparedness work together for safety and security of the ready citizen.

Gun owners care about training.  How do we know?  Not just because the NRA Guard Expo featured over 140 Seminars and Workshops, but because there was a good turnout to every one we visited, and a random survey showed that the vast majority of Expo attendees took part in at least one session. Many, in fact, were happy to tell us about their time in multiple seminars.

Both the Wisconsin and Utah CCW Courses were nearly full each day of the Expo, while workshops focused on a wide variety of topics, including: concealed carry skills, current and emerging threats, safe firearms storage, appendix carry, emergency preparedness, drawing from concealment, and close quarter vehicle defense.

Many Carry Guard Expo attendees also made use of both the NRA’s indoor tactical mobile range and the number of different simulator shooting booths and screens, eager to get hands-on and face-to-face with some of the best training options out there.

4. You can be prepared to survive an armed robbery or violent attack

Active Self Protection instructor John Correia provided an evidence-based approach using actual armed robbery video footage to teach attendees the best way to both cope with and respond to these or similar scenarios.  So what can you do without having been there?

First, consider the fact you may not always have access to your weapon.  Sometimes you have to make the best use of environmental or situational weapons–think fire extinguisher, cast iron pan, or pizza stone.

Second, be a “self defender” with a goal to get away from the threat and keep the threat from causing harm.  Don’t create a confrontation, but do be prepared and be aware.

Lastly, always be cognizant of unseen “trailing accomplices” or secondary threats that can further complicate an already dangerous scene.  Never pursue a threat for this and other safety considerations.

No matter the situation, Correia makes one thing clear — awareness is the name of the game.  Check out Correia’s Active Self Protection Youtube channel to see some his video-evidence-based training videos shared in the seminar.

5. There are things you can do to make your home more secure

Back to the Warrior Poet John Lovell in his workshop “Emergency Preparedness: Home Security Planning.” Without getting into great detail and not even using weapons, Lovell provided some great points to consider when securing your home.

First, reduce ambush points.  If you have a dark corner in the yard, invest in better security lighting.  If you always let your small dog out in the evening from the same door at the same time, consider varying your routine and at least be aware that this is an easy unforced entry point for intruders.  Use security signs at the major entry points, and invest in a monitored security system.

Also, break your home and property into “zones” and have a plan for each of those zones.  Consider how you will respond if you’re in the kitchen, how your spouse will respond when home alone with the kids, or what you would do in the dead of night or even in your yard.  Lovell makes one thing clear, pre-planning and training is the best medicine for preparedness.