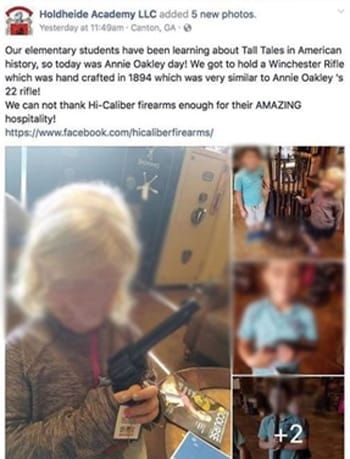 A screen grab of the images before they were removed. (Image: WSB-TV/Facebook)

Georgia officials issued a cease and desist letter to a Montessori school after public outrage erupted over images the school shared of young children holding firearms during a field trip to a gun range.

Outcry over the images led to an investigation by the Georgia Department of Early Care and Learning, which found that the school, Holdheide Academy, “was caring for pre-school aged children in an unlicensed space meant for a private school.”

The school, located about 30 miles north of Atlanta, came under scrutiny last week when it led first- and second-grade students on a field trip to gun range Hi-Caliber Firearms. The school’s owner, Tammy Dorsten, said the trip was part of a lesson to learn more about historic sharpshooter Anne Oakley and Davey Crockett.

“Annie Oakley is a part of our Georgia Approved curriculum encompassing Annie Oakley, Davy Crockett and Pecos Bill. Our goal was to show the students how difficult it was for Annie Oakley and others to accomplish all that they did,” Dorsten told local media.

She added: “The students were able to see the distances that Annie Oakley used when selecting her targets and the presentation made it very clear why Annie Oakley was a famous individual and someone whom we are still learning about over 123 years later.”

Sean Jerguson, who owns Hi-Caliber Firearms, was defensive about the characterization of the event. “When you say field trip, I don’t know what that means,” Jerguson told reporters and added, “We’ve had a number of youth programs here. I wouldn’t know how to define a field trip. We have a number of private and home-school groups come into the store.”

The controversial images showing children handling firearms — an 1894 Winchester carbine and a six-shooter — were shared on Holdheide’s Facebook page, but have since been taken down. Dorsten explained that the children attending the field trip were first given safety instructions before handling the firearms, and also had their parents’ written approval to attend the trip.

Local media documented comments on the schools social media pages, but the comments section appears to have been taken down. According to the school’s website, Holdheide offers programs for students ranging from pre-schoolers to 2nd grade.