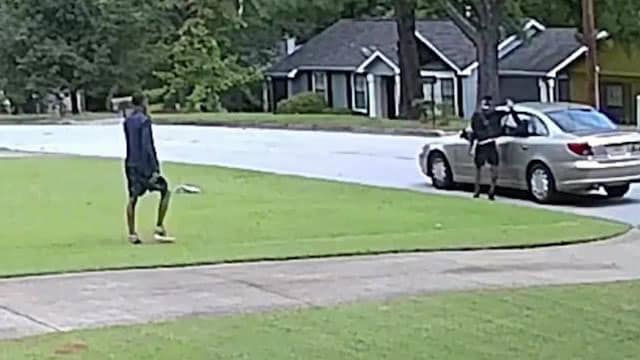 Authorities in Atlanta asked this week for the public’s help to identify two suspects in an armed robbery and subsequent shooting that occurred earlier this month.

An exchange of gunfire between one of the suspects and the victim of the robbery happened on Aug. 12 when the victim attempted to purchase a laptop through the app “Letgo,” a local CBS affiliate reported. Part of the encounter was captured on nearby surveillance video.

Police say the victim, identified as Lotanna Okonkwo, met with the suspects to purchase an Apple MacBook Pro laptop, which typically retails for around $1,000. The asking price during this particular transaction was $100.

During the course of the conversation, Okonkwo showed the suspect that he had the cash for the sale, then suggested the two exchange the money and the laptop at the same time. The suspect, however, had a different plan.

Police say the suspect, who went by the user name Rick Anderson, pulled a gun on the victim and told him to hand over his cash, along with his wallet. Okonkwo, who was also armed, attempted to grab his own gun for self-defense, and that’s when the suspect opened fire. Bullets struck the driver side door and bumper of the vehicle, but the victim was unharmed.

At that point, Okonkwo jumped out of his car and chased after the suspects as they fled. During the chase, the suspect continued to fire at Okonkwo, who returned fire. Okonkwo chased the suspects briefly before they got away. It did not appear that anyone was injured by gunfire, although Okonkwo received minor injuries to his hands and feet during the altercation. He did not require medical care.

Officers responding to the scene recovered the victim’s cash, the gun used by the suspect, as well as the laptop. However, the suspects were nowhere to be found.

Authorities describe the duo as black males, ages 15 to 17 years old. Both were wearing dark clothing. One suspect appeared to stand around 5’06 to 5’08, while the second suspect has a slim build and is around 5’10 to 5’11.

According to statistics from the Atlanta Police Department, so far this year, the city has received reports of nearly 900 robberies.